If the phase voltage across each phase is to remain sinusoidal, then the phase magnetising currents must be of the following form. 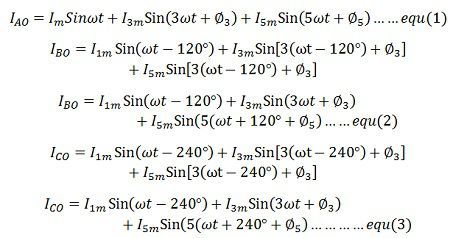 It is seen from equation (1), (2), and (3) that the third harmonics in the three currents are co-phase, that is they have the same phase. The fifth harmonics have different phases. 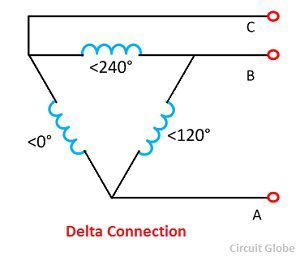 Let the IAO, IBO and the ICO represent the phase magnetising current in a delta connection. The line currents can be found by subtracting two phases current. For examples,

The delta connection only allows a sinusoidal flux and voltage with no third harmonic current in the transmission line. For this reason majority of the 3-phase transformer has delta connected windings and in places where it is not convenient to have an either primary or secondary connected in delta, a tertiary winding is provided. The tertiary windings carry the circulating third harmonics current required by the sinusoidal flux in each limb of the core.

In a delta connection, the voltage acting around the closed delta is, 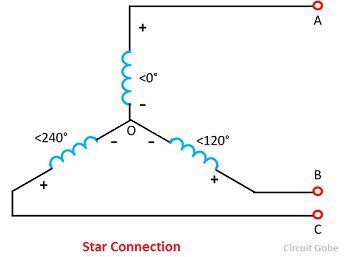 If IAO, IBO and ICO, represents the phase magnetising current in a star connection,

Where In is the current in the neutral wire.

The harmonics above the seventh be neglected. The equation (6) shows that under the balanced condition the current flow in the neutral wire is the third harmonic current. The magnitude of the third harmonics current is thrice the magnitude of each third phase current. The thirds harmonic current produced inductive interference with communication circuit. If the supply to the star connection is three wires, neutral current must be zero and therefore

Thus, it is seen that the three wire star connection suppresses the flow of harmonic and magnetising currents. For a four wire star-connected system, the in phase third harmonic current flow in the neutral wire.

Similarly, the third balance phase voltage containing harmonics can be written as

The equation (7), (8) and (9) shows that the third harmonics in the three phase voltage have the same phase. The line voltage in a star connection can be obtained by subtracting two phase voltages. For example

From equation (10) it is seen that the third harmonics is not present in the line to line voltage of a star connection. This applies to all triplers harmonics.