The figure shown below represents the typical layout of a plant level power distribution network.This electrical drive system receives its incoming AC supply from a Motor Control Center (MCC). MCC controls the power to few drives located in an area.

In a large manufacturing plant, many such MCCs exist and they receive power from the main distribution centre called Power Control Centre (PCC).The MCC and PCC normally used air circuit breaker as the power switching element. The ratings of these switching elements are up to  800V and 6400A. 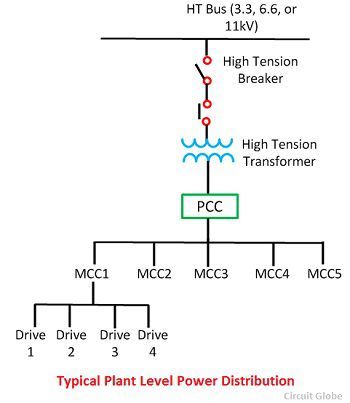 The thermal overload relays protect the overload in the electrical drive system. The short circuit protection is provided by the magnetic sensing mechanism of the breaker. The high rupturing capacity fuses are used for the backup protection as well as for providing the protection against the fault occurring in the bus bar section before the circuit breaker. 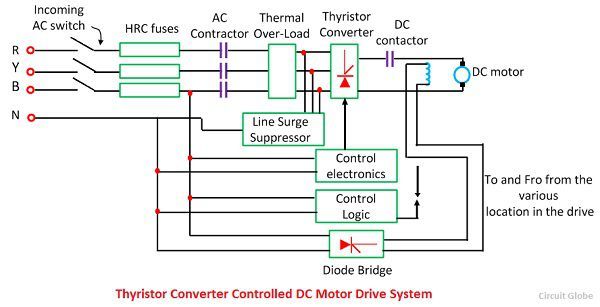 The GTO inverter controlled induction motor drive is shown in the figure below:

The following are the main parts of these drive systems:

The main parts of the electrical power system are explained below.

It uses the HRC fuse whose rating is up to  660V, 800A. The AC switchgear consists thermal overload for protecting the system from overloading. Sometimes the contractor of the switchgear is replaced by the moulded case circuit breaker.

When the drive operates in a closed loop, it will have a controller and current and speed feedback loops. The control system has three port isolation, i.e. the power supply, inputs and outputs which are isolated with adequate insulation levels.

3. Line Surge Suppressors – It protects the semiconductor converter against voltage spikes produce in the line due to on and off switchings of the load connecting on the same line. The line surge suppressor along with the inductance suppress the voltage spikes.