Let us now see on what factors the two bands are differentiated using comparison chart.

It is basically defined as the energy band that comprises of valence electrons present in the outermost shell of an atomic structure. These valence electrons, when provided with sufficient energy, get changed into free electrons and moves to conduction band thereby causing conductivity.

It is sometimes abbreviated as VB and is at a lower energy level than the conduction band in the energy level diagram. These two bands are separated by a certain amount of energy known as the forbidden energy gap. This energy gap depends on the type of material i.e., either the material is conductor, insulator or semiconductor.

As this band is a lower energy state, therefore, by the application of externally applied potential, the electrons in this band moves out of it and transfer towards the higher state so as to allow conduction through the material. 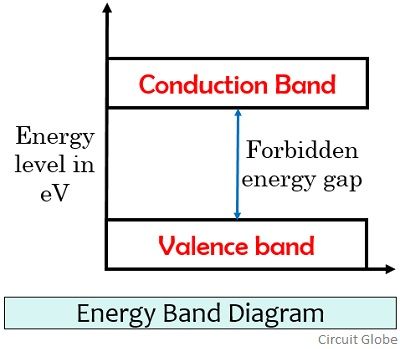 This band is present above the fermi energy level i.e., is at higher energy state. Thus, electrons require a large amount of excitation energy to reach conduction band thereby giving rise to electric current. It is abbreviated as CB and it allows free movement of electrons inside it.

As we have already discussed that the forbidden energy gap between valence and conduction band is different for different material.

Like in case of conductors the two bands overlap and thus the electrons present in the lower energy band can easily move to the conduction band. But in the case of semiconductors, a sufficient energy gap exists between the two bands, therefore, external energy is needed to free the valence electrons. While for insulators the bandgap is very large and thus extremely large energy is required to make the valence electron a free electron.

So by this discussion, we can say that various factors exist that differentiates valence from the conduction band. But most importantly the two are differentiated on the basis of their presence in the energy band diagram.

2 thoughts on “Difference Between Valence Band and Conduction Band”