In this content, we will see on what factors conduction is differentiated from convection. Let us have a brief idea about what is Heat?

So, basically, heat is regarded as a form of energy that can be transferred from one region to compensate for the difference in temperature.

Conduction refers to a process of transfer of heat energy from one surface to another which are in direct contact with each other. In the mechanism of conduction, the heat transfer takes place in a stationary medium i.e., solids. Fourier’s law explains the rate of heat transfer while conduction.

The figure below shows the pictorial representation of how heat transferring takes place during the process of conduction:

How the process of conduction takes place?

The process of conduction occurs in a way that here the heat energy is transferred when collision occurs between adjacent molecules vibrating with high velocity. These high-velocity molecules when come in direct contact with the molecules of solids which are at room temperature then the molecular vibration is transferred at the point of contact. Further, these vibrating molecules transfer the vibration to their adjacent molecule and in this way the body at room temperature gets hot.

The mode of transfer of heat by the displacement of fluid molecules from one region to another is known as Convection. Convection is generally of two types one is forced while the other is natural.

Natural convection is when the motion in a medium occurs due to the difference in temperature of two liquids when mixed. Whereas forced convection is the one in which motion is the result of any external unit like a pump or blower. 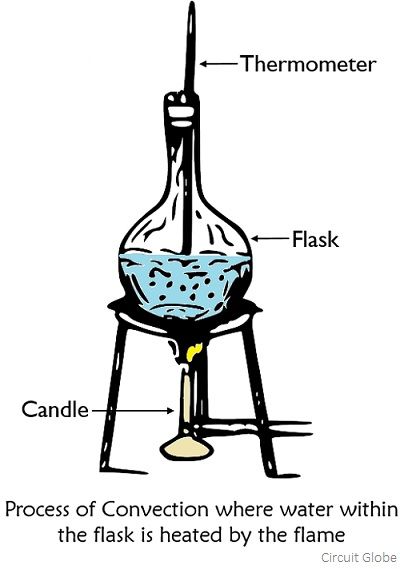 Key Differences Between Conduction and Convection

Thus, the above discussion concludes that the two modes of heat transfer differentiated here explain the manner in which the transfer of heat takes place along with the material matter in which it is noticed.