The crucial difference between series and parallel circuit exist on the basis of orientation of the components in the circuit. In a series circuit, the multiple components are connected in a cascaded manner i.e., the tail of a component is connected to the head of the other.

While in a parallel circuit, the multiple components are connected in head to head and tail to tail orientation.

In the series circuit, the components in the circuit are connected one after the other or we can say in a cascaded fashion. More specifically we can say that a series circuit allows the connection in a manner that tail of one component is directly connected to the head of the other and so on corresponding to the two ends of the battery.

The figure below shows the series connection of 4 resistors in a circuit: 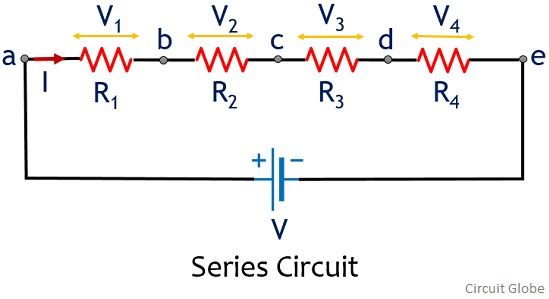 As we can clearly see that the components are cascaded in a single line, thus same current, I will flow through all the resistors of the series network. While different potential difference exists between the various resistors of the circuit.

It can be understood in a way that if the same current is flowing among all the resistors, so the drop across each resistor will depend on the resistance offered by each resistor in the circuit. Thus, we can say that, in a series circuit due to the presence of a single path, the same current flows through all the components. Thereby giving rise to the existence of different potential difference (voltage) across each component. 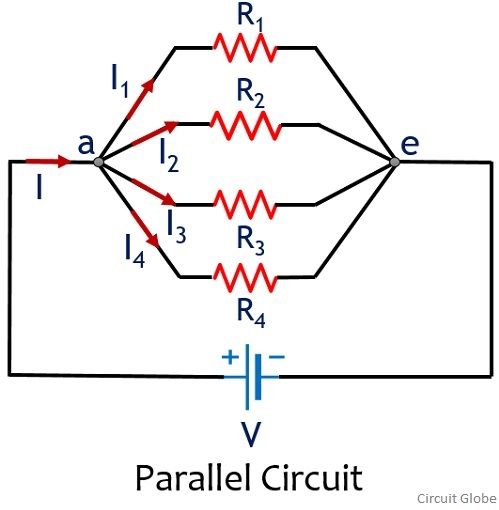 As we can see here that the parallel circuit is having 4 branches and different current is flowing through each branch. But as the branches are sharing common points thus the same potential exists across the two points wrt the two ends of the battery potential.

It can also be understood in a way that if the same potential difference is existing across each resistor of the circuit. Then the actual current flowing through each branch will automatically depend on the resistance offered by each resistor in the circuit.

Therefore, we can say that due to the existence of multiple branches in the circuit, the overall current from the supply gets divided into multiple branches, as the voltage across the points is the same.

So, from this discussion, we can say that, in the series circuit, flowing current remains the same at each part of the circuit. While in parallel circuits, the voltage across two endpoints of the branches is the same as the supplied voltage.

2 thoughts on “Difference Between Series and Parallel Circuit”