The miniature circuit breaker is an electromechanical device which, automatically, switch off the circuit whenever the abnormal condition occurs. It easily senses the overcurrent caused by the short circuit. 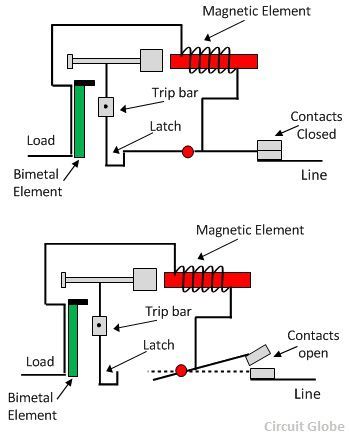 The working principle of the miniature circuit is very simple. Their main function is to protect the equipment from overcurrent. It has two contacts one is movable, and the other one is fixed. When the current increases from the predefined limit, their movable contacts are disconnected from the fixed contacts which make the circuit open and disconnects them from the main supply.

The MCCB stands for moulded case circuit breaker. It is a protecting device which protects the circuit from overloading. It is mainly used in a place where adjustable tripping requires. The current rating of MCCB is up to 2500 amps. It is mainly used for high current applications. The MCCB has a manually operated switch for tripping the circuit.

The  MCCB has two arrangements. One for the over temperature and the other for the over current. It consists bimetallic contact which expands and contracts when the temperature of the MCCB changes.

During the normal operating conditions, the contact allows the current to flow through the circuit. But as the current rises beyond the predefined value, then their contacts will warm and expand until the contacts are open. Thus, disconnected the circuit from the main supply and protects the equipment from damage.

Key Differences Between MCB and MCCB

The MCB and MCCB both are the thermomagnetic devices and are classified under low voltages breaker..

9 thoughts on “Difference Between MCB & MCCB”