The LED and LCD both are used for displaying the images and texts. The LED using gallium arsenide and gallium phosphide which when heated emits visible light. The LED is used for showing the numeric and alphanumeric characters. On the other hand, the LCD has a thin layer of liquid crystal filament between the glass electrodes. When the power is applied across the electrodes they start emitting light energy in the form of photons. The LCD displays the text or images in the form of dot matrix and segments.

The full form of LED is Light Emitting Diode. The LED is a PN junction diode which emits light when an electric current flows through it in the forward direction. The LED is constructed by doping the p-type and n-type material. When the power is applied across the LED the recombination of P-type and N-type material charges takes places. The recombination of charges gives energy in the form of heat and light. 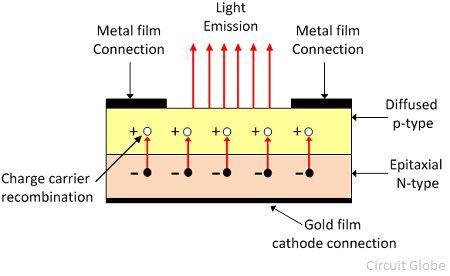 The LCD is used for displaying the texts and images in the form of dot matrix or segments. The LCD has liquid crystal filament which is filled between the transparent electrodes. When the current passes between the electrodes, the filaments become energised and emits visible light.

The construction of liquid crystal display is shown in the figure below. The liquid crystal used in the display has the property of both the solid and the liquid. When the potential is not applied across the liquid crystal, it becomes transparent but after activation, the crystal scatters light in all directions and appears to be bright.

The LCD consumes less power and also have seven segment displays. But it is a slow device and requires more times for switching.The dc reduces their lifespan and hence mostly they are used with AC having a frequency less than 500 Hz.

Key Differences Between LED and LCD

The LED and LCD both are the modern technologies. But LED has more advantages than LCD and hence it is mostly used for making the displays.

2 thoughts on “Difference Between LED & LCD”