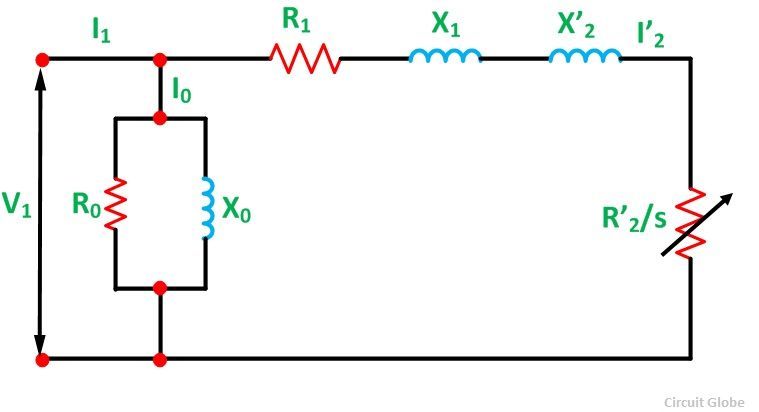 Let the phase voltage V1 be taken along the vertical axis OY as shown in the figure below: 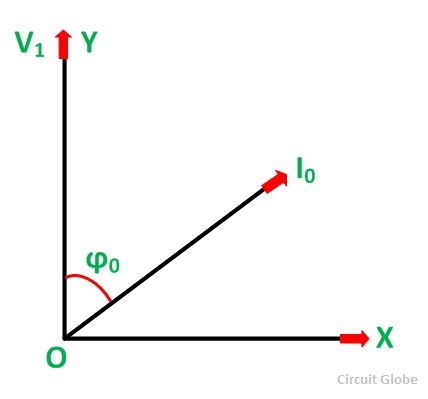 The No-Load current I0 = OA lags behind V1 by an angle ϕ0. The no-load power factor angle ϕ0 is of the order of 60 to 80 degrees because of the large magnetizing current needed to produce the required flux pole in a magnetic circuit containing the air gaps.

Here, all the rotational losses are considered under R0 and the no-load loss is given by the equation shown below:

The rotor current referred to the stator is given by:

The current I’2 lags behind the voltage V1 by the impedance angle ϕ as shown in the figure below:

The above equation (3) is of the form r = a sin φ which represents a circle in polar form with the diameter a.

From the above figure (b) shown, the following points are illustrated.

The resulting circle diagram of the induction motor is shown below: 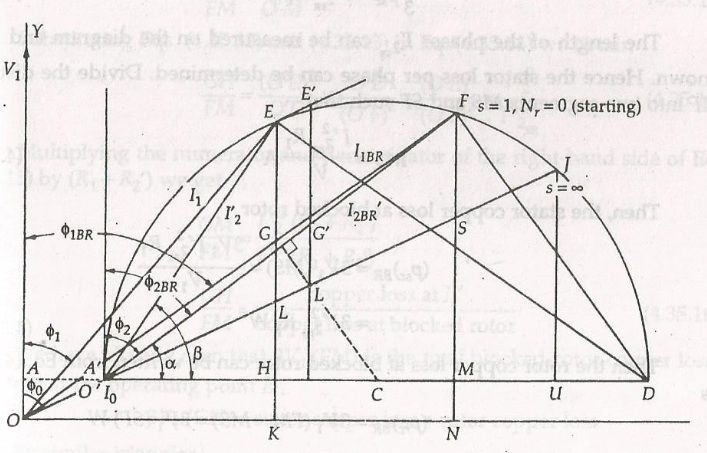 It is seen that the tip of the phasor I1 coincides with that of the phasor I’2. Thus, the locus of both I1 and I’2 is the upper semicircle. I1 and I’2 radiate from the origin O and O’ respectively. When the motor is started s = 1 with the rated voltage, the tip of I1 and I’2 will be at some point F of the circle.

As the motor accelerates, the tips of I1 and I’2 move around the circle in an anti-clockwise direction. This process continues until the output torque matches the load torque. If there is no shaft load, the motor accelerates to synchronous speed. At this point I’2 = 0 and I1 = 0.

Construction of the Circle Diagram

The following data are required for constructing the circle diagram:

Steps to draw Circle Diagram of an Induction Motor:

Result Obtained from the Circle Diagram

Assume that the line current I1 is known. With the centre at O, draw an arc with the radius I1. This arc intersects the circle at the operating point E. Draw the line EK and locates the point H, L, G.

The following results are obtained from the circle diagram shown above.

Significance of lines on the Circle Diagram

The vertical distance between any point on the circle and the line ON represents the input power. Therefore, line ON is called the input line.

The vertical distance between any point on the circle and the line O’G represents the output power. Hence, line O’F is called the output line.