The Center Tapped Full Wave Rectifier employs a transformer with the secondary winding AB tapped at the centre point C. It converts the AC input voltage into DC voltage. The two diode D1, and D2 are connected in the circuit as shown in the circuit diagram below. 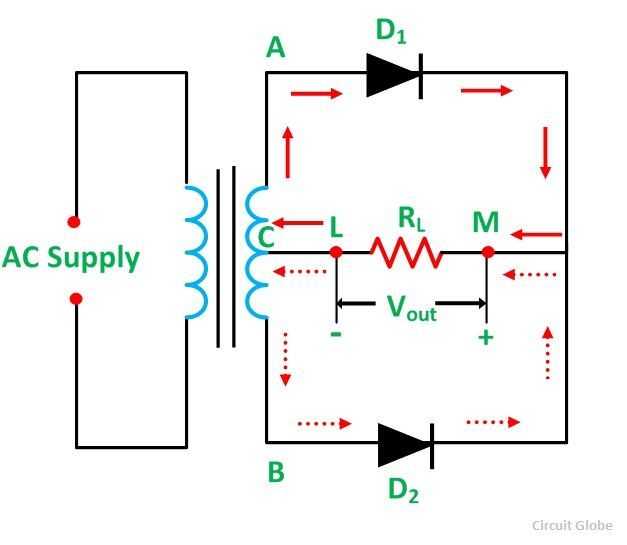 When AC supply is switched ON the alternating voltage, Vin appears across the terminals AB of the secondary winding of the transformer. During the positive half cycle of the secondary voltage, end A becomes positive, and end B becomes negative. Thus, the diode D1 becomes forward biased, and diode D2 becomes reverse biased.

The two diodes conduct simultaneously. Therefore, when the diode D1 conducts, the diode D2 does not conduct and vice versa.

When the Diode D1 is conducting, the current (i) flows through the diode D1 load resistor RL (from M to L) and the upper half of the secondary winding as shown in the circuit diagram marked by the red color arrowheads. During the negative half-cycle, the end B becomes positive, and end A becomes negative. This makes the diode D2 forward biased, and diode D1 reverse biased.

When the diode D2 conducts while the diode D1 does not. The current (i) flows through the diode D2 load resistor RL (from M to L) and the lower half of the secondary winding as shown by the red dotted arrows.

The current flowing through the load resistor RL is in the same direction (i.e., from M to L) during both the positive as well as the negative half cycle of the input. Hence, the DC output voltage (Vout = i RL) is obtained across the load resistor.

The wave diagram of the input voltage, the current flowing through the load, and the output voltage developed across the load is shown in the figure below: 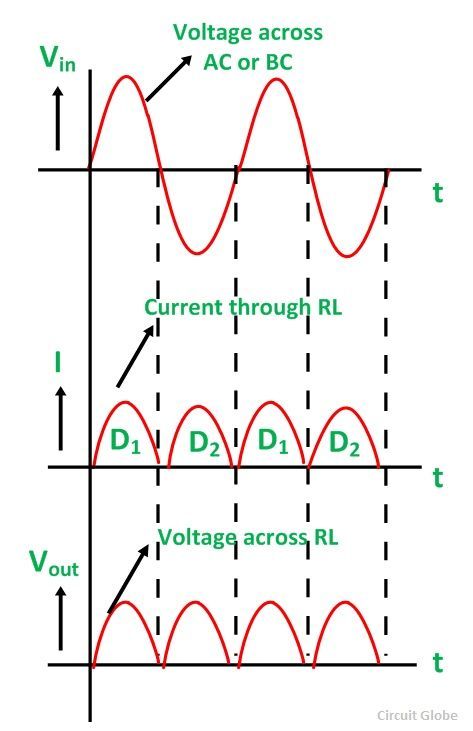 The circuit diagram given below shows the instant when the secondary voltage attains its maximum positive value. 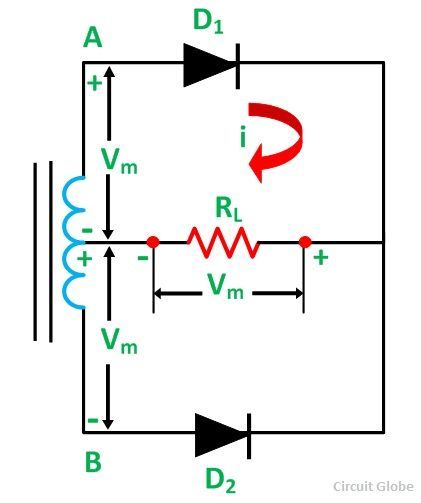 At this instant, Vm developed in the upper half of the secondary winding of the transformer will forward bias the diode D1. This diode conducts, and the current flows through RL, developing Vm voltage across it.

The Disadvantages of the Center tapped full wave rectifier are as follows:-