We all know that waves are regarded as disturbance where there are continuous oscillations of constituents at a specific point or in the nearby points. In this way, a wave allows the information and energy to get propagated from one point to another but without the physical transfer of matter.

Waves are differentiated on the basis of characteristics possessed by them. Mainly, the orientation of particles, motion, and direction of energy are crucial characteristics. Hence, waves are of 3 types which are mechanical, electromagnetic, and matter waves.

Here the electric and magnetic fields are in a perpendicular orientation to each other and so with the direction of wave propagation. 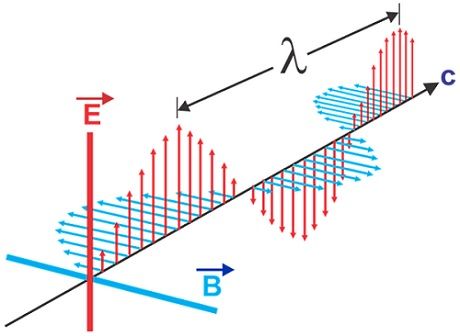 The variation in electric and magnetic fields of the electromagnetic waves is shown in the figure given.

Radio wave, x-ray, infrared, gamma, light, microwaves are known as electromagnetic waves. These waves propagate with a constant velocity of 3*108 m/s and do not need any specific medium to propagate.

EM waves are said to be of transverse nature hence is measured by amplitude and wavelength.

Matter Waves are associated with moving particles and are the result of the motion of electron, proton, neutron, and other fundamental particles along with atoms and molecules. As its major constituent is matter hence these are known as matter waves.

De-Broglie suggested that each moving particle has some associated waves. And as every matter is composed of particles thus it is said that all matter possesses wave-like behaviour.

There are some characteristics of matter wave which are as follows:

According to Broglie, the wavelength is given as:

Matter waves require an appropriate medium to propagate and the speed of propagation is also low.

So, this discussion concludes that these two types of waves exhibit different characteristical properties because these are originated differently.