In bulk oil circuit breaker, oil performs mainly two functions. Firstly, it acts as an arc extinguishing medium and secondly, it insulates the live parts of the breaker from earth. The quantity of oil requires for arc extinction is only about one-tenth of the total and the rest being used for the insulation. 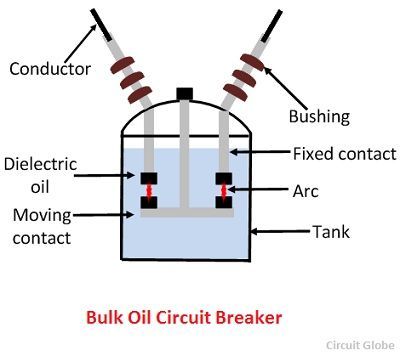 These large quantities of oil are subject to the carbonisation, sludging, etc., which occurs due to arc interruption and other causes reducing the insulating properties and requires regular maintenance.

This circuit breaker is of the single breaker type in which a moving contact tube moves in a vertical line to make or break contact with the upper fixed contacts mounted within the arc control devices.

A lower ring of fixed contacts is in permanent contact with the moving arm to provide the other terminal of the phase unit. Within the moving contact, the tube is a fixed piston. When the moving contact moves downwards, it forces the insulating oil to enter into the arc control devices . Thus, the arc gets extinguished. 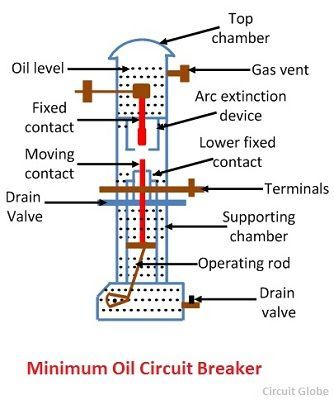