The Polyphase Induction Motor is a motor whose stator contains a number of windings. They are greater than one horsepower or one kilowatt. The National Electrical Manufacturers Association (NEMA) has specified the motors according to the various classes, which are discussed below in detail. There are various applications of Polyphase wound rotor induction motors, Polyphase cage induction motors. They are as follows:

Many polyphase cage induction motors are available in the market to meet the demand of several industrial applications and various starting and running condition requirements. They are classified according to Class.

The speed-torque characteristics of Cage Induction Motor of various Classes are shown below: 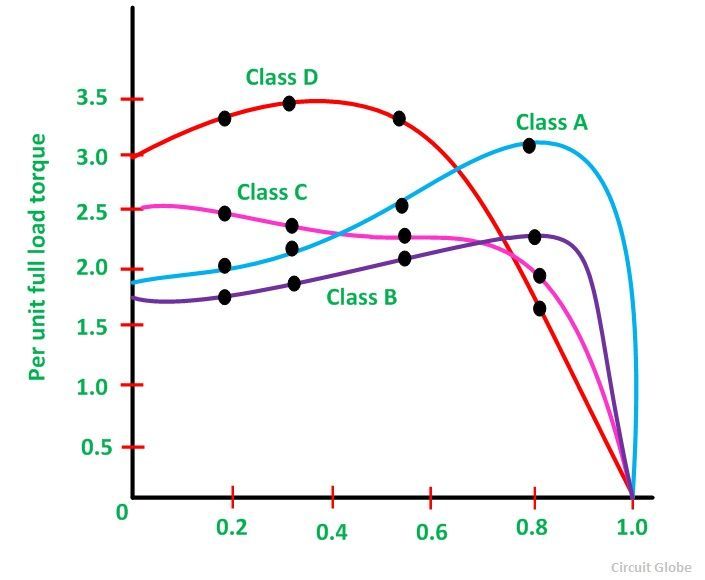 Class A motors have normal starting torque, high starting current, and low operating slip (0.005-0.015). The design has a low resistance single cage rotor. The efficiency of the motor is high at full load. Applications of Class A motors are fans, blowers, centrifugal pumps, etc.

The Class B motors are the most commonly used motor and used for full voltage starting. The applications and the starting torque are the same as that of Class A motors.

The class C motors have high starting torque and low starting current. Such motors are of the double cage and deep bar and have higher rotor resistance. The loads are compressors, conveyors, reciprocating pumps, crushers, etc.

Class D motors have the highest starting torque as compared to all the other classes of motors. The bars of the rotor cage is made up of brass. These types of motors have low starting current and high operating slip. The value of full load operating slip varies between 8 to 15%. Thus, the efficiency of the motor is low.

These motors are suitable for driving intermittent loads which require frequent acceleration and high loads. For example – punch presses, bulldozers, and die stamping machines. When the motor is driving the high impact loads, it is coupled to a flywheel to provide kinetic energy.

1 thought on “Applications of Induction Motor”