The winding factor is the method of improving the rms generated voltage in a three-phase AC machine so that the torque and the output voltage do not consist of any harmonics which reduces the efficiency of the machine. Winding Factor is defined as the product of the Distribution factor (Kd) and the coil span factor (Kc). The distribution factor measured the resultant voltage of the distributed winding regards concentrate winding and the coil span is the measure of the number of armature slots between the two sides of a coil. It is denoted by Kw. The EMF equation is given below:

The third harmonic, EMF per phase will be:

The nth harmonic, EMF per phase will be here subscript 1,3 and n denote fundamental, third, and nth harmonics respectively.

Similarly for the nth harmonic 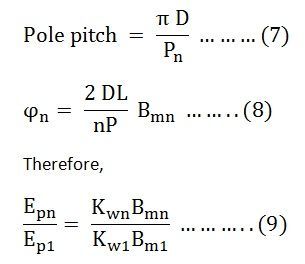 Bmn is the peak value of the nth harmonic flux density

The winding factor corresponding to the nth harmonic voltage is given as:

Where Kcn and Kdn are the coil span factor and distribution factor for the nth harmonic.

Therefore, the nth order harmonic induced EMF per phase is given by the equation shown below:

In addition, to the fundamental flux, the induced voltage in a winding will contain harmonics because of the non-sinusoidal space flux density distribution. Since the positive and the negative halves of the flux density wave are identical, only odd harmonics can be present, and even harmonics are absent. Therefore, phase voltage may contain third, fifth, seventh, and higher-order harmonics.

Since the strength of the harmonic components of voltage decreases with the increasing frequency, only fifth and seventh harmonics are important. These are known as Belt Harmonics.

Thus, the root mean square voltage of the induced voltage across lines of a 3 phase, star connected machine is given by the equation shown below: