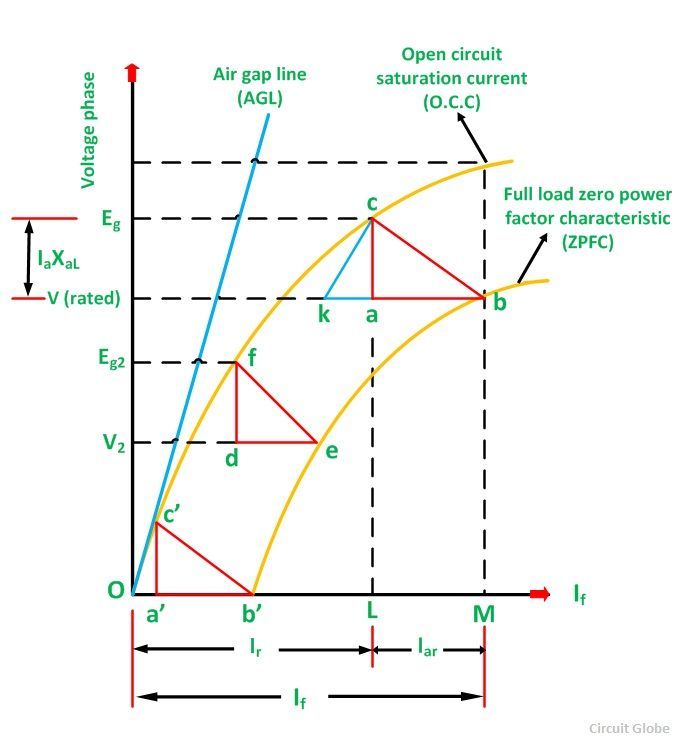 Consider a point B on the Zero Power Factor Curve corresponding to rated terminal voltage V and a field current of OM = If = Ff/Tf. If for this condition of operation the armature reaction MMF has a value expressed in equivalent field current will be given as:

Then the equivalent field current of the resultant MMF would be represented as shown below:

The vertical distance ac must be equal to the leakage reactance voltage DROP IaXaL where Ia is the rated armature current.

Therefore, for all the conditions of operation with rated armature current at zero lagging power factor, the Potier Triangle must be located between the terminal voltage V, a point on the ZPFC, and the corresponding Eg point on the O.C.C.

Steps for Construction of Potier Triangle on ZPFC

For cylindrical rotor machines, the Potier reactance Xp is approximately equal to the leakage reactance XaL. in salient pole machine, Xp may be as large as 3 times XaL.

The following assumptions are made in the Potier Triangle Method. They are as follows:-

It is not necessary to plot the entire ZPFC for determining XaL and Fa, only two points b and b’ are sufficient. Point b corresponds to a field current which gives the rated terminal voltage while the ZPF load is adjusted to draw rated current. Point b’ corresponds to the short circuit condition (V = 0) on the machine. Thus, Ob’ is the field current required to circulate the short circuit current equal to the rated current.