The Distribution Factor or the Breadth Factor is defined as the ratio of the actual voltage obtained to the possible voltage if all the coils of a polar group were concentrated in a single slot. It is denoted by Kd and is given by the equation shown below.

In a concentrated winding, each phase of a coil is concentrated in a single slot. The individual coil voltages induced are in phase with each other. These voltages must be added arithmetically. In order to determine the induced voltage per phase, a given coil voltage is multiplied by the number of series connected coils per phase. In actual practice, in each phase, coils are not concentrated in a single slot. They are distributed in a number of slots in space to form a polar group under each pole.

The voltages induced in coil sides are not in phase, but they differ by an angle β which is known as the angular displacement of the slots. The phasor sum of the individual coil voltages is equal to the total voltage induced in any phase of the coil.

M = slots per pole per phase

Thus, one phase of the winding consists of coils arranged in m consecutive slots. Voltages EC1, EC2, EC3….. are the individual coil voltages. Each coil voltage EC will be out of phase with the next coil voltages by the slot pitch β. 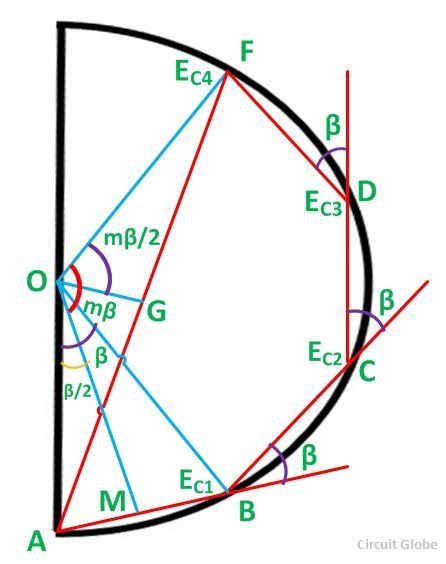 The voltages EC1, EC2, EC3 and EC4 are represented by the phasors AB, BC, CD and DF respectively. Each of these phasors is a chord of a circle with the center O and subtends an angle β at the point O. The phasor sum AF, represents the resultant winding voltage, subtends at an angle mβ at the center.

The arithmetic sum of the individual coil voltage is given as

The phasor sum of the individual coil voltages is given as

Therefore, from the equation (1) shown above, we know that,