Definition: Self-induced emf is the e.m.f induced in the coil due to the change of flux produced by linking it with its own turns. This phenomenon of self-induced emf can be further understood by the following example given below: 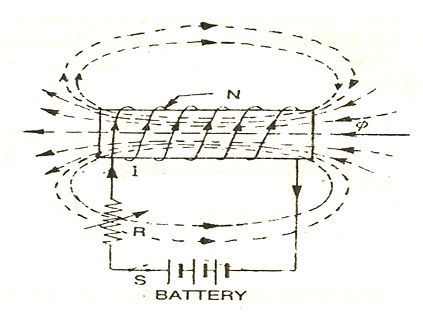 Consider a coil having N number of turns as shown in the above figure. When the switch S is closed and current I flows through the coil, it produces flux (φ) linking with its own turns. If the current flowing through the coil is changed by changing the value of variable resistance (R), the flux linking with it, changes and hence emf is induced in the coil. This induced emf is called Self Induced emf.

The direction of this induced emf is such that it opposes its very own cause which produces it, that means it opposes the change of current in the coil. This effect is because of Lenz’s Law.

1 thought on “Self Induced EMF”