Definition: The emf induced in a coil due to the change of flux produced by another neighbouring coil linking to it, is called Mutually Induced emf.  Let us take an example to understand the phenomenon of mutually induced emf. 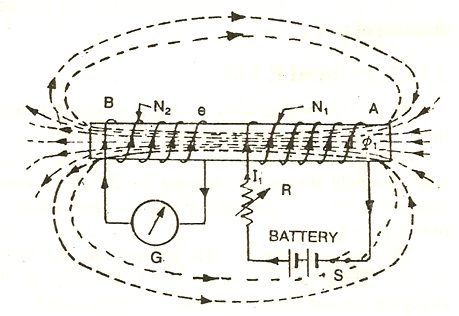 When the switch (S) is closed in the circuit shown above, current I1 flows through the coil A, and it produces the fluxφ1. Most of the flux says φ12 links with the other coil B.

If the current flowing through the coil A is changed by changing the value of variable resistor R, it changes flux linking with the other coil B and hence emf is induced in the coil. This induced emf is called Mutually Induced emf.

The rate of change of current in coil A is directly proportional to the magnitude of the mutually induced emf.