The connection diagram of a 3 phase balanced load connected as Star Connection is shown below: 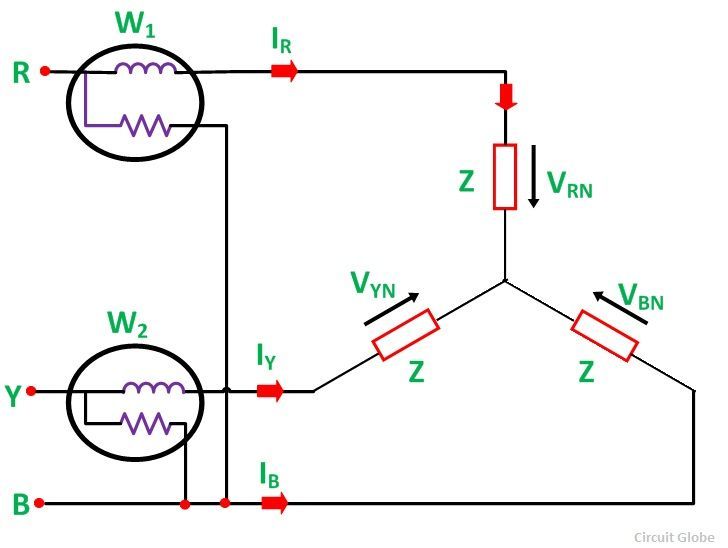 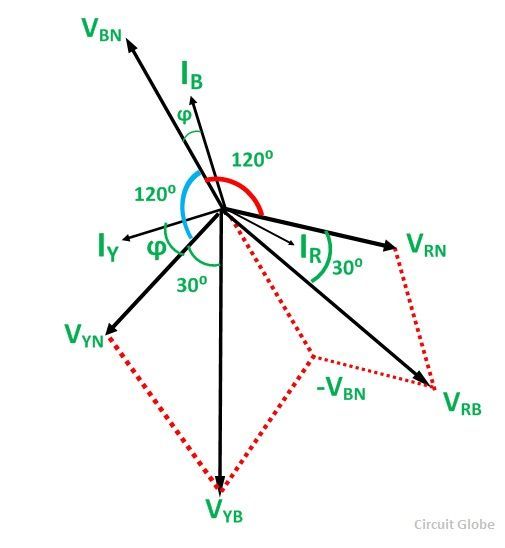 The three voltages VRN, VYN and VBN, are displaced by an angle of 120 degrees electrical as shown in the phasor diagram. The phase current lag behind their respective phase voltages by an angle ϕ.

The potential difference across the pressure or potential coil of the wattmeter, W1 will be:

The phase difference between VRB and IR is (30⁰ – ϕ)

Therefore, the power measured by the Wattmeter, W1 is:

Current through the current coil of the Wattmeter, W2 is given as:

The potential difference across the Wattmeter, W2 is

Therefore, the power measured by the wattmeter, W2 is given by the equation shown below:

Since, the load is in a balanced condition, hence,

Therefore, the wattmeter readings will be:

Now, the sum of two Wattmeter readings will be given as:

The above equation (1) gives the total power absorbed by a 3 phase balanced load.

Thus, the sum of the readings of the two Wattmeters is equal to the power absorbed in a 3 phase balanced load.

The power factor of the load is given as

To get the reactive power, multiply equation (3) by √3.

Therefore, reactive power is given by the equation shown below:

For the Measurement of the three-phase power, you can also refer the two topics given below: