The travelling wave plays a major role in knowing the voltages and currents at all the points in the power system. These waves also help in designing the insulators, protective equipment, the insulation of the terminal equipment, and overall insulation coordination.

The travelling wave can be represented mathematically in a number of ways. It is most commonly represents in the form of infinite rectangular or step wave. A travelling wave is characterised by four specifications as illustrated in the figure below. 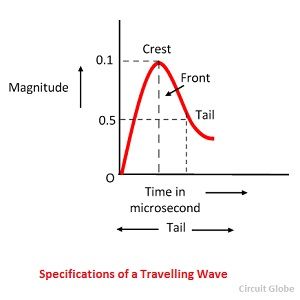 Crest – it is the maximum aptitude of the wave, and it is expressed in kV or kA.

Front – It is the portion of the wave before the crest and is expressed in time from the beginning of the wave to the crest value in milliseconds or µs.

Tail – The tail of the wave is the portion beyond the crest. It is expressed in time from the beginning of the wave to the point where the wave has reduced to 50% of its value at its crest.

Surge is a type of travelling wave which is caused because of the movement of charges along the conductor. The surge generates because of a sudden vary steep rise in voltage (the steep front) followed by a gradual decay in voltage (the surge tail). These surges reach the terminal apparatus such as cable boxes, transformers or switchgear, and may damage them if they are not properly protected.

The transmission line is a distributed parameter circuit and its support the wave of voltage and current. A circuit with distributed parameter has a finite velocity of electromagnetic field propagation. The switching and lightning operation on such types of circuit do not occur simultaneously at all points of the circuit but spread out in the form of travelling waves and surges.

When a transmission line is suddenly connected to a voltage source by the closing of a switch the whole of the line in not energised at once, i.e., the voltage does not appear instantaneously at the other end. This is due to the presence of distributed constants (inductance and capacitance in a loss-free line).

Considered a long transmission line having a distributed parameter inductance (L) and capacitance (C). The long transmission line is divided into small section shown in the figure below.The S is the switch used for closing or opening the surges for switching operation. When the switch is closed the L1 inductance act as an open circuit and C1 act as a short circuit. At the same instant, the voltage at the next section cannot be charged because the voltage across the capacitor C1 is zero.

So unless the capacitor C1 is charged to some value the charging of the capacitor C2 through L2 is not possible which will obviously take some time. The same argument applies to the third section, fourth section, and so on. The voltage at the section builds up gradually. This gradual build up of voltage over the transmission conductor can be regarded as though a voltage wave is travelling from one end to the other end and the gradual charging of the voltage is due to associate current wave.

The current wave, which is accompanied by voltage wave steps up a magnetic field in the surrounding space. At junctions and terminations, these waves undergo reflection and refraction. The network has a large line and junction the number of travelling waves initiated by a single incident wave and will increase at a considerable rate as the wave split and multiple reflections occurs. The total energy of the resultant wave cannot exceed the energy of the incident wave.