A power system is said to be effectively grounded or solidly grounded when the neutral of a generator, power transformer or grounding transformer are directly connected to the ground through a conductor of negligible resistance and reactance. A part of a system or system is said to be solidly grounded when the positive-sequence impedance of the system is greater or equal to the zero sequence resistance, and positive sequence reactance is three times greater than or equal to the zero sequence reactance. 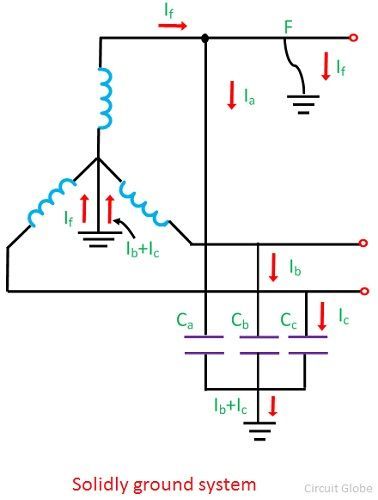 Consider a system having three phases a, b and c shown in the figure above. If the single-ground-fault occur in phase a the voltage of the phase becomes zero. However, the remaining two phases b and c will still have the same voltages as before shown in the figure below. When the fault occurs in the system, in addition to the charging current the power source also feeds the fault current.

For the solidly neutral grounded system, it is necessary that the ground fault current should not exceed 80% of the three-phase fault. It is usually used for keeping the fault current within safe limits.