Definition: OTDR is an acronym used for Optical Time Domain Reflectometer. It is an instrument that is used to detect or analyze the scattered or back reflected light through an optical fiber due to impurities and imperfections in the fiber.

The operating principle of an OTDR is similar to that of radar. OTDR performs timed measurements of reflected light.

OTDR basically determines the characteristics of an optical fiber cable through which optical signal propagates.

It is also used to evaluate parameters such as splice losses, reflectance angle of a light signal, fiber attenuation etc.
When a signal is transmitted through an optical fiber cable then during transmission some part of the signal gets reflected. This reflection results in signal attenuation that mainly occurs due to defects in the fiber cable.

Thus, an OTDR is used as testing equipment in optical fiber communication system in order to determine the signal loss level inside a fiber cable.

An optical time domain reflectometer is test equipment used to evaluate the loss of signal inside an optical fiber by transmitting laser pulses inside the fiber and measures the scattered light signal.

The figure below represents the operational principle of an OTDR: 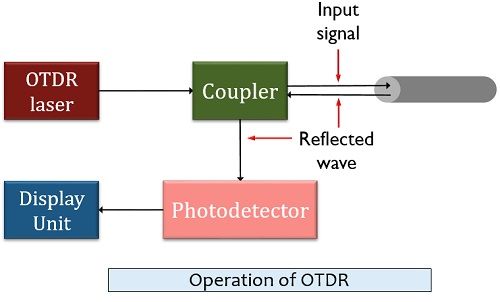 As we can see in the figure shown above that an optical time domain reflectometer contains a light source (mainly a laser) and a receiver along with a coupler or circulator. The coupler is connected with the fiber under test through a front panel connector.

The laser produces a short and intense light beam. These pulses are directed into the fiber link under test through a fiber optic coupler. A coupler splits the transmitted light pulse into two halves. Due to this, not all the transmitted pulse is directed inside fiber.

By inserting circulators in the operational unit of OTDR, the dynamic range of the equipment can be improved. However, it also causes the overall cost of the system to increase considerably as circulator is highly expensive in comparison to couplers.

Sometimes variation in the refractive index also causes the light energy to get reflected. This reflected energy reaches the OTDR and in this way, it detects the characteristics of the fiber link.

The specifications of OTDR are discussed below: 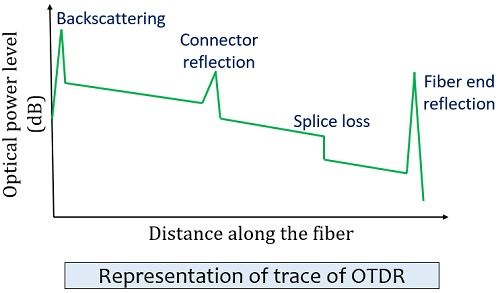 Now, on observing the trace of the OTDR, we can list the features of the reflected wave:

The dead zone of an OTDR is a crucial parameter. It is the distance in the fiber cable at which the defects cannot be measured properly.

Now the question arises why a dead zone occurs in an OTDR?

In case a very major portion of the transmitted signal is reflected then the received power at the photodetector is highly greater than the backscattered power level.

This saturates the OTDR with the light and hence it needs some duration to overcome the saturation. In this recovery duration, the reflectometer is unable to detect the backscattered reflection. Thereby leading to generate a dead zone in the trace of OTDR.

There exist two crucial parameters on which the performance of the OTDR depends. These are as follows:

Dynamic range: This is basically the difference between the backscattered optical power at the front connector and the peak of the noise level at the other end of the fiber. By evaluating the dynamic range one can get an idea about the maximal measured loss inside the fiber link and the time needed for such a measurement.

Measurement range: The measurement range is nothing but provides the distance up to which splice or connection points can be detected by the OTDR. Its value relies on the width of the transmitted pulse and the attenuation.

Hence, we can conclude that an OTDR is a very useful instrument used in an optical communication system. However, certain drawbacks are also associated like dead zone of OTDR.