Let’s consider a bit smaller part of a long transmission line having length ‘ds’ situated at a distance ‘s’ from the receiving end. Series impedance of the line is represented by ‘zds’ and ‘yds’ is the shunt impedance of the line. Due to charging current and corona loss the current is not uniform along the line. Voltage is also different in different parts of the line because of inductive reactance. 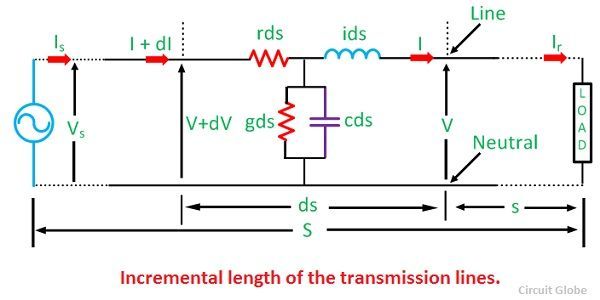 The difference in the voltage between the ends of the assumed sections of length ds is dV. This difference is caused by the series impedance of the line.

Similarly, the difference between the two ends of the section resulting from the shunt admittance of the line is given by the equation

for knowing the value of V, differentiate equation (1) with respect to ‘s’, 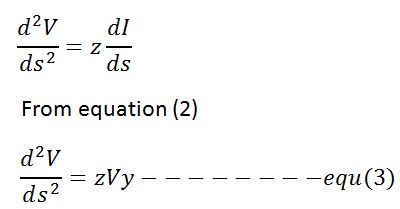 and for current differentiate equation (2) 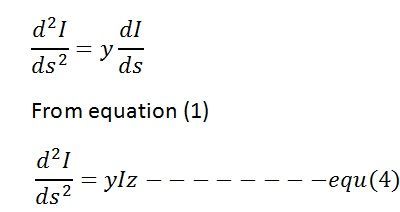 equation (3) and (4) are similar in form and therefore their general equations are also similar.

The equation (5) is the linear differential equation with constant coefficients.The general solution of this equations is

Where, C1 and C2 are the arbitrary constants, and it is found from the known value of the V and I at some point of the line. For determining the value of I differentiate the above equation with respect to ‘s’

on combining the above equation with equation (1) we get,

substituting the value of ϒ = √zy in equation (7) gives

The value of V and I at the receiving end where s = 0, is given by the equations

The value of  C1 and C2 are substituted in general equations of voltage and current to obtain the steady-state values of V and I at any intermediate point distant ‘s’ from the receiving end.

For governing the behaviour of transmission line in steady-state equation (13) and (14) are used. These equations can also be written in hyperbolic form by using hyperbolic constant shown below

Substitutes the hyperbolic constant in equations (13) and (14) gives

The  ABCD parameters are defined below 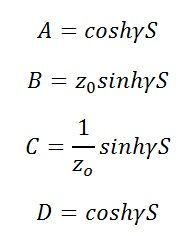 These equations help in evaluating the performance of the long line.