Definition: Electron gun is defined as the source of focused and accelerated electron beam. It is a device used in Cathode Ray Tube for displaying the image on the phosphorous screen of CRT. The electron gun emits electrons and forms them into a beam by the help of a heater, cathode, grid, pre-accelerating, accelerating and focusing anode.

For getting the high emission of electrons at the moderate temperature, the layer of barium and strontium oxide is applied at the end of the cathode. The current and voltage required by the indirectly heated cathode are approximately equal to the 600 mA and 6.3V. 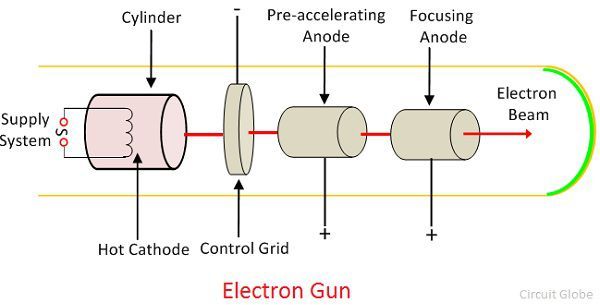 The main function of the electron gun is to produce and accelerate the beam of an electron inside the vacuum tube of the CRT. For generating and accelerating the gun requires the heater, cathode electrodes, grid, and different types of anodes. The detail explanation of their parts is shown below.

1. Heater – The heater converts the electric energy in the form of heat. It has a resistor which obstructs the flow of current and converts it into the thermal energy. The heater heats the cathode electrodes and emits the electrons.

2. Control Grid – The control grid is a nickel cylinder. It is the metallic cup which has lower permeability steel. It is about 15 mm long and having the diameter of 15 mm. The hole of about 0.25 mm is drilled in the cap of the grid for the flow of the electron. The intensity of electron beam passing through the grid depends upon the emission of electrons. The control grid is negative biasing due to which it controls the flow of electrons.

The electrons gun are placed inside the glass tube so that the electron beam did not interact with the air molecules.