The significant factor of differentiation between the stepper motor and servo motor lies in the way the two are constructed and controlled. Servomotors are regarded as an alternative to stepper motor when high performance is considered.

Before understanding more differences between the stepper motor and servo motor. Let us first see –

More simply, we can say that a motor is an electrical device that generates rotational force. Thus, the main aim of the stepper and servo motor is to change the applied electrical signal into angular velocity or movement of the shaft.

A stepper motor is a brushless motor designed to operate in a number of steps without using a feedback mechanism. Its basic principle of operation is such that it has a rotor (which is generally a permanent magnet) that rotates discretely when the stator (winding) which is surrounded by the rotor is energized externally. The rotation is the result of magnetic interaction between poles of rotor and poles of stator winding which is provided sequential excitation. 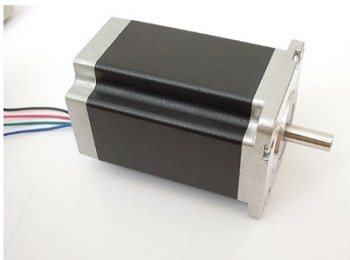 Thus, we can say, that there is no electrical winding present in the rotor of the stepper motor but it takes the energization provided to the stator winding as input thereby generating output as discrete angular rotation. This is done in a way that, on activating the winding, sequentially step by step current flows through them thereby magnetizing the stator. This resultantly develops electromagnetic poles thus the propulsion within the motor takes place.

A servo motor is based on the principle of servomechanism and is a closed-loop system consisting of various units in order to rotate machine parts with high precision. Unlike stepper motor, it uses the feedback mechanism that offers angular precision because of which we can get the desired rotation according to the applied input signal.

Basically, it is constructed in a way that, its output shaft can be moved to a particular angle, a position with a specific velocity that is not offered by any regular motor.

Here the applied electrical signal can be either analog or digital in nature and this applied signal corresponds to the amount of movement required to position the shaft. As a feedback unit, either encoder or resolver is used which provides the speed and position-related information to the controller. The speed of the motor varies in proportion to the applied input voltage.

This discussion concludes that the servo motor offers more efficient operation than the stepper motor. One of the major reasons for this is the closed-loop configuration of the servo motor that makes use of error signals to provide accurate positioning and angular displacement.

2 thoughts on “Difference Between Stepper Motor and Servo Motor”