The potentiometer measures the unknown emf or voltage by making a comparison with a known voltage. And the rheostat controls the flow of current through the circuit by varying the resistance. In this article we will discuss various factors that differentiates potentiometer from rheostat.

While connecting a potentiometer in the circuit, it is kept in mind that both its terminals are connected to the circuit. Also, the wiper forms the connection with the circuit that provides the output voltage through that circuit. The value of this voltage will vary according the voltage levels of the two terminal points.

A potentiometer functions as a voltage divider whose output voltage shows variation according to the movement of the slider over the track.

The figure below shows the arrangement of a potentiometer: 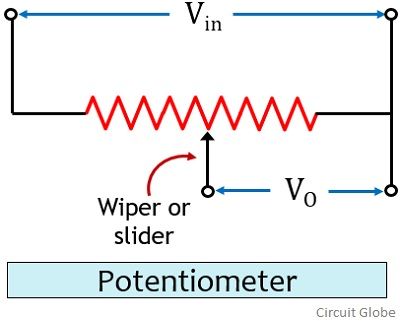 The figure below shows the voltage divider circuit comprising of two resistors in series: 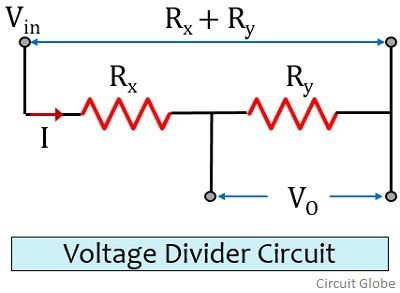 As the two resistances are of two different values thus the voltage drop will also be different. The output voltage through the circuit will be given as:

A rheostat is a 2 terminal device whose one end is directly connected the circuit while the other is kept unconnected. However, like the potentiometer, here also the wiper terminal forms the connection with the circuit.

The figure below represents the arrangement of a rheostat: 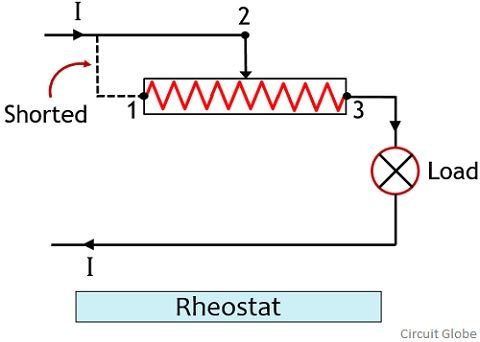 Sometimes the wiper terminal forms connection with the terminal 1 thereby short circuiting the region between terminal 1 and 2. The principle working of rheostat is such that, the resistance of the element will depend on its length through which the current is flowing.

Suppose if we move the slider in a position away from the connected terminal then in this case the length of the resistive region increases thus resistance will be high. Hence small amount of current to flow through it. While if the slider is moved towards the connected terminal then this resultantly reduces the resistive region length thereby reducing the resistance and hence the current flowing through it increases.

It is to be noteworthy here that despite changing the actual resistance, the movement of the slider is changing the length of the resistive region. This resultantly increases or decreases the resistance and therefore the current.

Key Differences Between Potentiometer and Rheostat

So, we can say that though both potentiometer and rheostat are the instruments that controls two different factors. But both utilizes the movement of slider or wiper in order to have significant change in the quantity required for their operation.

1 thought on “Difference Between Potentiometer and Rheostat”