The specific points on a wave can be crest, trough or zero crossing.

Consider the figure given below: 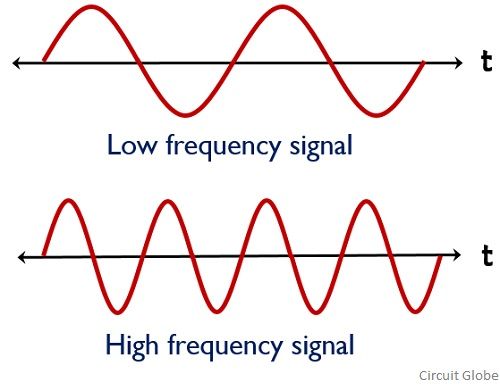 The frequency of waves can have values up to a larger range like kHz or MHz. Frequency is generally denoted as ‘f’ or ‘ν’. The time duration in which one complete wave is produced is known as time period.

Frequency is a parameter used to explain the oscillatory or vibratory motion like sound wave, lightwave, mechanical vibration etc. The relation between frequency and time period is given as:

The time period tells the minimum duration after which the wave motion is repeated. So, the reciprocal of the time period provides the number of repetitions occurring in a unit time i.e., frequency. The audible frequency range lies between 20 Hz to 20 kHz. And it is determined by the source by which it is produced.

The minimum distance between the two consecutive identical wave points is known as wavelength. As it specifies the distance thus its fundamental unit is meter. Consider the figure below:

So, one wavelength is the length between two consecutive crests or troughs or zero crossing in the phase similar to wave motion. And it is measured in the direction of motion of the wave. Wavelength is denoted as ‘λ’.

Key Differences between Frequency and Wavelength

So, from this discussion we can conclude that wavelength and frequency are related to each other by the expression:

Thus the two shows inverse proportionality wrt each other. So, if two waves are travelling with the same speed then wave with higher frequency will have a greater wavelength and vice-versa.

1 thought on “Difference Between Frequency and Wavelength”