A network configuration in which multiple devices are connected one after the other in a linear manner to a common communication cable is known as bus configuration. The common cable or link can be either coaxial cable or twisted pair cable. The figure below represents the bus topology: 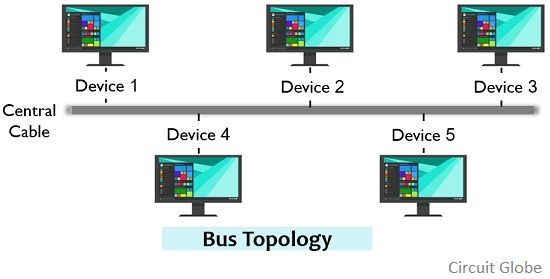 The cable to which various nodes are connected is known as the backbone of the network. This cable serves as the most crucial element of the network, as if it fails then the complete network stops operating. However, bus topology can be easily installed as a single link is required.

It is sometimes called line topology and is generally used in small areas. It does not offer secured communication as the signal is transmitted through a common cable and hence can be accessible to all the devices present in the network. When a device in the network fails, then there is no effect on the other nodes of the network. However, if the cable itself gets failed, then the complete system gets shut down.

Star topology is a type of network configuration in which various physical devices are individually linked to the hub. This signifies that the device in the network is connected separately to the hub, and there exists no direct interconnection between the multiple devices of the network.

The figure below represents star topology: 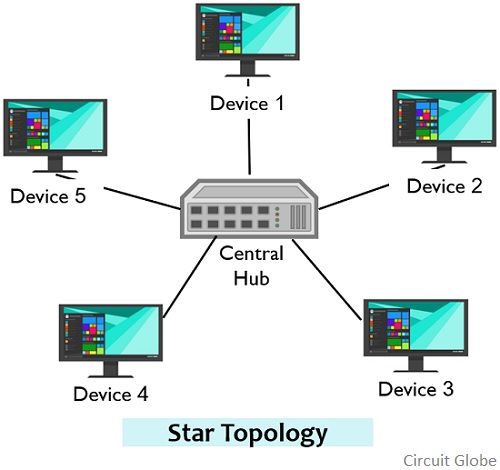 This is the reason; the hub must be properly configured as any type of issue in the hub will cause, failure of the complete system. Hence it offers the flexibility of operation with other devices even when a single device of the network is faulty. The whole network configuration resembles a star; thus, it is named so. However, its structure is quite complex, but it is preferred over bus topology due to the advantages associated with it.

Hence from this discussion, we can conclude that the bus is the traditional network orientation but suffers major drawbacks. However, the star is a recent configuration but is more complex.