The important parts of the Synchronous Machine are given below:

The stationary part of the machine is called Stator. It includes various parts like stator frame, stator core, stator windings, and cooling arrangement. They are explained below in detail.

The stator core is made of silicon steel material. It is made from a number of stamps that are insulated from each other. Its function is to provide an easy path for the magnetic lines of force and accommodate the stator winding.

Slots are cut on the inner periphery of the stator core in which 3 phase or 1 phase winding is placed. Enameled copper is used as a winding material. The winding is star-connected. The winding of each phase is distributed over several slots. When the current flows in a distributed winding it produces an essentially sinusoidal space distribution of EMF.

The rotating part of the machine is called Rotor. There are two types of rotor construction, namely the salient pole type and the cylindrical rotor type. 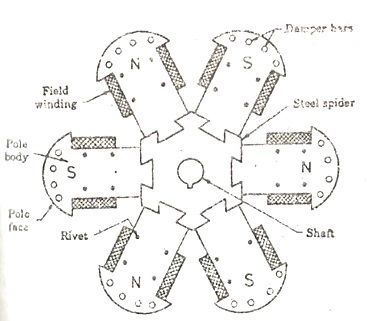 Since the rotor is subjected to changing magnetic fields, it is made of steel laminations to reduce eddy current losses. Poles of identical dimensions are assembled by stacking laminations to the required length. A salient pole synchronous machine has a non-uniform air gap. The air gap is minimized under the pole centers and it is maximum in between the poles.

They are constructed for medium and low speeds as they have a large number of poles. A salient pole generator has a large diameter. The salient pole rotor has the following important parts.

Spider: It is made of cast iron to provide an easy path for magnetic flux. It is keyed to the shaft and at the outer surface, pole core and pole shoe are keyed to it.

Pole Core and Pole Shoe: It is made of laminated steel sheet material. The Pole core provides the least reluctance path for the magnetic field and the pole shoe distributes the field over the whole periphery uniformly to produce a sinusoidal wave.

Field Winding or Exciting Winding: It is wound on the former and then placed around the pole core. DC supply is given to it through slip rings. When direct current flows through the field winding, it produces the required magnetic field.

Damper Winding: At the outermost periphery, holes are provided in which copper bars are inserted and short-circuited at both sides by rings forming Damper winding.

In this type of rotor, there are no projected poles, but the poles are formed by the current flowing through the rotor exciting winding. Cylindrical rotors are made from solid forgings of high-grade nickel chrome-molybdenum steel. It has a comparatively small diameter and long axial length.

They are useful in high-speed machines. The cylindrical rotor type alternator has two or four poles on the rotor. Such a construction provides greater mechanical strength and permits more accurate dynamic balancing. The smooth rotor of the machine makes fewer windage losses and the operation is less noisy because of the uniform air gap.

The figure below shows the end view of the 2 poles and 4 pole cylindrical rotors. 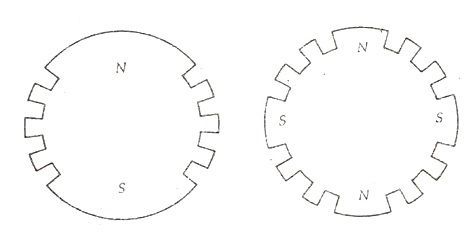 They are driven by steam or gas turbines. Cylindrical synchronous rotor synchronous generators are called turbo-alternators and turbo generators. The machines are built in a number of ratings from 10 MVA to over 1500 MVA. The biggest size used in India has a rating of 500 MVA installed in the super thermal power plant.

Non-salient pole-type rotors have the following parts. They are as follows:

Rotor Core: The rotor core is made of silicon steel stampings. It is placed on the shaft. At the outer periphery, slots are cut in which exciting coils are placed.

Rotor Winding or Exciting Winding: It is placed on the rotor slots, and the current is passed through the winding in such a way that the poles are formed according to the requirement.

The miscellaneous parts are given below:

Bearings: Bearings are provided between the shaft and the outer stationary body to reduce the friction. They are made of high carbon steel.

Shaft: The shaft is made of mild steel. Mechanical power is taken or given to the machine through the shaft.

7 thoughts on “Construction of a Synchronous Machine”