In a three phase line, each phase has a capacitance on earth. When the fault occurs on any of the phases, then the capacitive fault current flows into the ground. If the fault current exceeds 4 – 5 amperes, then it is sufficient to maintain the arc in the ionised path of the fault, even though the fault has cleared itself.

The capacitive current over 4 to 5 ampere flows through the fault give rise to an arc in the ionised path of the fault. With the formation of the arc, the voltage across it becomes zero, and therefore the arc is extinguished. The potential of the fault current restored due to which the formation of a second arc takes places. The phenomenon of intermitting arcing is called the arcing grounding.

The alternating extinction and reignition of the charging current flowing in the arc build up the potential of the other two healthy conductors due to the setting of the high-frequency oscillations. The high-frequency oscillations are superimposed on the network and produce the surge voltage as high as six times the normal value. The overvoltage damages the healthy conductor at some other points of the system.

How to Eliminates Arcing Ground? 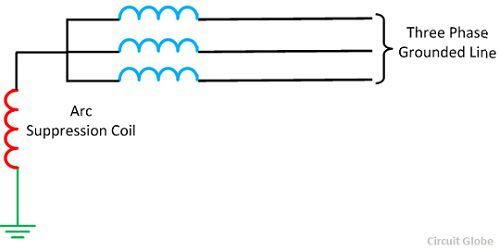 The reactor of the arc suppression coil extinguishes the arcing ground by neutralising the capacitive current. The Peterson coil isolates the system, in which the healthy phases continue supplies power and avoid the complete shut down on the system till the fault was located and isolated.