The air break switches install in outdoor and mainly use for switching and isolation. The air break switch is mostly installed in the distribution network as a switching point. It interrupts the small excitation current of a transmission line or the capacitive charging current. The maximum voltage for the switches is up to 35kV. The air-break switches are classified into two types. They are Single-Pole Air-Break Switch and the Gang Operated Air-Break Switch.

Working and Construction of an Air-Break Switch

The air-break switch has both the blade and the contact furnished with arcing horns. Arcing horn is the type of metal between which the arc induces due to interrupt current. When the switch is open, the arc spreads farther and farther apart, and the arc lengthens until it finally breaks. 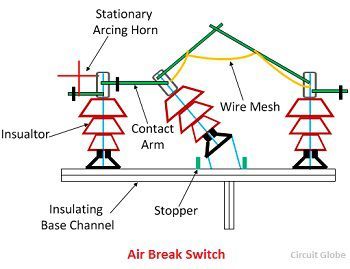 Air break switches are of several designs. Some switches operate from the ground by a holder on the end of an insulated stick; some others are through a system of linkages and opens by a crank at the foot of the pole.

When more than one conductor open, there may be several switches arrange on the same pole. They may be opened singly or all together in a group. Some switches are mounted so that the blade opens downwards and these may be provided with latches to keep the knife blades from jarring open.