A network having two input and two output terminals is known as a two port network. The network shown below has four terminals in which A and B represents the input port where as C and D represents the output port. 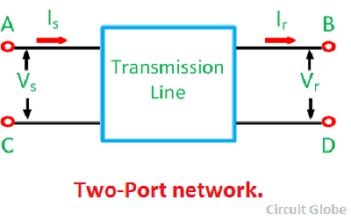 is called the transfer or transmission matrix of the network. 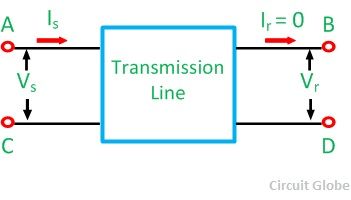 In the open circuit, the output terminals are open, and the voltage measure across them is Vr. Since the circuit is open at the receiving end, the current Ir remains zero. 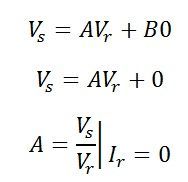 From above equations, we get the value of A parameter which is the ratio of sending end voltage to the receiving end voltage. It is a dimensionless constant because their ratio has the same dimension.

Similarly, if Ir =0 is substituted in current equation, 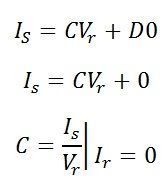 we get the value of c parameter which is the ratio of the sending end voltage to the current. Its unit is Siemens.

For the short circuit, the voltage remains zero at the receiving end. 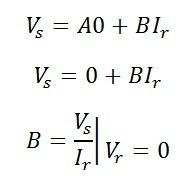 If we put Vr = 0 in the equation, we get the value of B which is the ratio of sending end voltage to the receiving end currents. Its unit is ohms.

Similarly, if we put Vr= 0 in current equations, 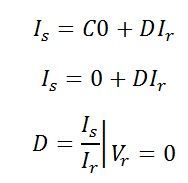 we get the value of D, which is the ratio of the sending current to the receiving current. It is the dimensionless constant.

For determining the relation between various types of network, like passive or bilateral network reciprocity theorem is applied. The voltage V is applied to the sending end, and the receiving end is kept short circuit, so the voltage becomes zero.

Since, under short circuit the receiving end voltage is zero, the voltage and current equations become

Similarly, the voltage is applied at the receiving end, and the input voltage remains zero. Thus, the direction of the current in the network changes, which is shown in the diagram below

The sending end voltage becomes zero. The current flows through the receiving end is given by the equation

Consider, the network is passive, i.e. it contains only passive components in the circuit like inductance, resistance, etc. So the current remains same Is = Ir.

Combining the above equations give,

dividing the above equation from -V/B we get,

This relation helps in determining the fourth parameters if we know any three parameters.

For a symmetrical network, the input and output terminal may be interchanged without affecting the network behaviour.

If the network is supplied from input terminals and an output terminal is short circuit, then the impedance becomes

in the symmetrical network, the impedance remains the same