3 Point Starter is a device whose main function is starting and maintaining the speed of the DC shunt motor. The 3 point starter connects the resistance in series with the circuit which reduces the high starting current and hence protects the machines from damage. Mainly there are three main points or terminals in 3 point starter of the DC motor. They are as follows:

The 3 Point DC Shunt Motor starter is shown in the figure below: 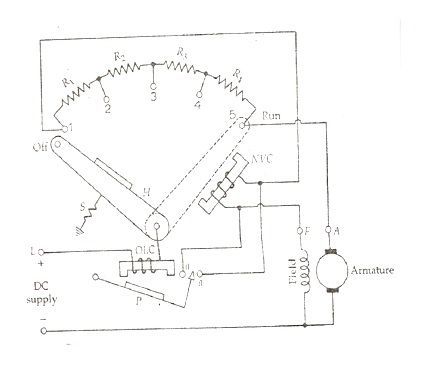 It consists of a graded resistance R to limit the starting current. The handle H is kept in the OFF position by a spring S. The handle H is manually moved, for starting the motor and when it makes contact with resistance stud one, the motor is said to be in the START position. In this initial start position, the field winding of the motor receives the full supply voltage, and the armature current is limited to a certain safe value by the resistance (R = R1 + R2 + R3 + R4).

The starter handle is now moved from stud to stud, and this builds up the speed of the motor until it reaches the RUN position. The studs are the contact point of the resistance. In the RUN position, three main points are considered. They are as follows:

The handle H is held in RUN position by an electromagnet energized by a no-volt trip coil (NVC). This no-volt trip coil is connected in series with the field winding of the motor. In the event of switching OFF, or when the supply voltage falls below a predetermined value, or the complete failure of supply while the motor is running, NVC is energized.

The handle is released and pulled back to the OFF position by the action of the spring. The current to the motor is cut off, and the motor is not restarted without a resistance R in the armature circuit. The no voltage coil also provides protection against an open circuit in the field windings.

The No Voltage Coil (NVC) is called NO-VOLT or UNDERVOLTAGE protection of the motor. Without this protection, the supply voltage might be restored with the handle in the RUN position. The full line voltage is directly applied to the armature. As a result, a large amount of current is generated.

The other protective device incorporated in the starter is overload protection. The Over Load Trip Coil (OLC) and the No Voltage Coil (NVC) provide the overload protection of the motor. The overload coil is made up of a small electromagnet, which carries the armature current. The magnetic pull of the Overload trip coil is insufficient to attract the strip P, for the normal values of the armature current

When the motor is overloaded, that is the armature current exceeds the normal rated value, P is attracted by the electromagnet of the OLC and closes the contact aa thus, the No Voltage Coil is short-circuited, shown in the figure of 3 Point Starter. As a result, the handle H is released, which returns to the OFF position, and the motor supply is cut off.

Drawbacks of a 3 Point Starter

The following drawbacks of a 3 point starter are as follows:-

Hence, to overcome this difficulty, the 4 Point Starter is used.