If the current in the coil is increasing, the self-induced emf produced in the coil will oppose the rise of current, that means the direction of the induced emf is opposite to the applied voltage. 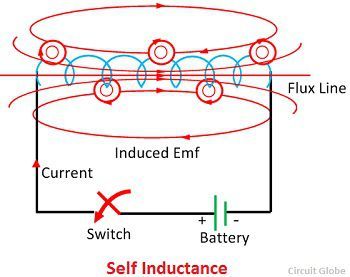 This property of the coil only opposes the changing current (alternating current) and does not affect the steady current that is (direct current) when flows through it. The unit of inductance is Henry (H).

Expression For Self Inductance

The above expression is used when the magnitude of self-induced emf (e) in the coil and the rate of change of current (dI/dt) is known.

Putting the following values in the above equations as e = 1 V, and dI/dt = 1 A/s then the value of Inductance will be L = 1 H.

Hence, from the above derivation, a statement can be given that a coil is said to have an inductance of 1 Henry if an emf of 1 volt is induced in it when the current flowing through it changes at the rate of 1 Ampere/second.

The expression for Self Inductance can also be given as:

where,
N – number of turns in the coil
Φ – magnetic flux
I – current flowing through the coil

From the above discussion, the following points can be drawn about Self Inductance

The solenoid has large self-inductance.

8 thoughts on “Self Inductance”