Residual magnetism is defined as the amount of magnetization left behind after removing the external magnetic field from the circuit.

In other words, the value of the flux density (ob as shown in the figure with the red colour line) retained by the magnetic material is called Residual Magnetism and the power of retaining this magnetism is called Retentivity of the material.

Magnetization occurs by applying the current in one direction, and the flux density is increased until the saturation point (a) is reached. Now to demagnetize the magnetic ring the magnetizing force H is reversed by reversing the direction of flow of the current, as discussed in the article ‘Magnetic hysteresis‘.

When H is increased in the reverse direction, the flux density starts decreasing and become zero and the curve follows the path (bc) as shown in the figure below. This residual magnetism of the magnetic material is removed by applying magnetizing force (oc) called the coercive force in the opposite direction. 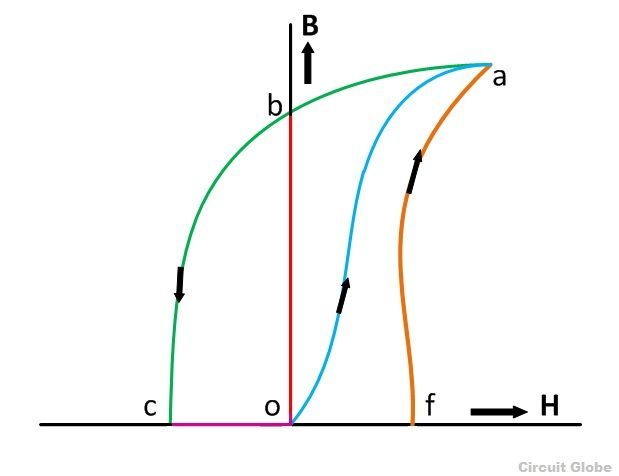 This phenomenon of the residual magnetism is widely seen in the transformers, generators, and motors. It is also called as Remanence.

The various types of Remanence are as follows 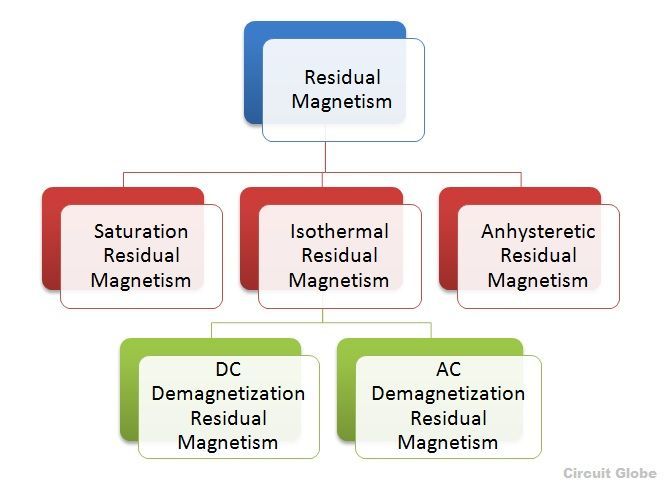 Detailed explanation of the various types of remanence is given below:

Saturation Remanence is the total magnetic moment per volume of the sample. It is denoted by Mr, and it is sometimes also called as saturation Isothermal Remanence, denoted by Mrs.

This method mainly depends on the magnetic field of the material. In this method first the magnetic material is magnetized in an alternating field and after that magnetizing field, H is applied and then removed. It is also called as Initial Remanence.

The Isothermal Remanence is further categorized into two methods

This method is also called as DC Demagnetization residual magnetism. It is denoted by Md(H). In this process, the magnet is magnetized in one direction by applying the electric current until it reaches the saturation point, and then applying the current in the opposite direction and removing the magnetic field.

As the name itself suggests that AC means the magnet or the magnetic material is magnetized in an (AC) alternating current field and the saturation point is obtained. It is denoted by Ma(H).

Anhysteretic Remanence is a method in which the magnetic material is placed in a large alternating magnetic field with a small amount of DC bias field. To get remanence, the amplitude of the alternating field is reduced to zero gradually and then the bias DC field is removed from the circuit.

Residual Magnetism can be reduced by the following methods