Definition: The Wagner earthing device is used for removing the earth capacitance from the bridges. It is a type of voltage divider circuit used to reduces the error which occurs because of stray capacitance. The Wagner Earth device provides high accuracy to the bridge. 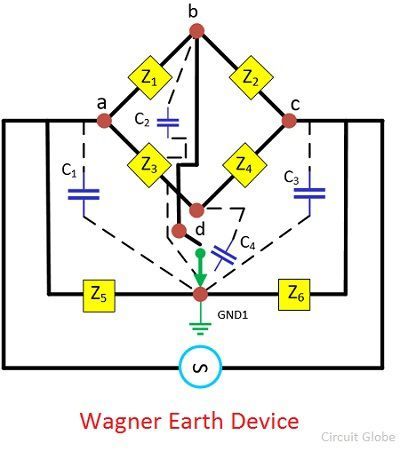 The Wagner impedance placed in such a way so that they make the bridge balance with Z1, Z3 and Z2, Z4. The C1, C2 C3 and C4 show the stray capacitances of the bridges. The D is the detector of the bridge.

The bridge comes in the balance condition by adjusting the impedances of arms Z1 and Z4. The stray capacitance prevents bridge to comes in the balanced condition. When the S is not thrown on ‘e’ then the D is connected between the point p and q. But when S is thrown on ‘e’ then the detector D is connected between the terminal b and earth.

The point b, d, and e all are in the same potential. And the capacitance C1, C2, C3, C4 all are eliminated from the bridge circuit along with the impedances Z5 and Z6.