Definition: When a light ray travels from a denser medium to a rarer medium, with an angle of light incidence more as compared to a critical angle then the incident ray gets reflected back to the same medium. This phenomenon is called Total Internal Reflection. It is abbreviated as TIR.

Now the question arises why we are calling it a total internal reflection?

The answer is that the complete light ray gets reflected towards the same medium without any losses, thus it is called so. We will discuss this concept in more detail but before that let us understand how any light ray shows reflection and refraction.

Refraction and Reflection of light ray

Consider two mediums, the first m1, is the rarer medium and the second m2 is the denser medium.

We know when a light ray moves from a denser medium to a rarer medium then it holds the tendency to move away from the normal.

In this case, the angle of the refracted ray will definitely be more than the incident angle.

Let us have a look at the figure shown below that represents the refraction of light: 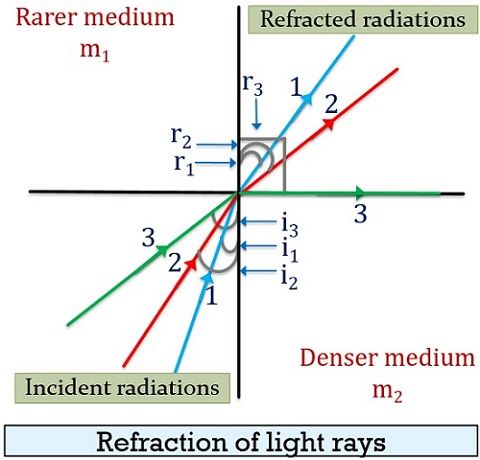 In the above figure, ray 1 represents some specific angle of incidence. Let, this angle be i1. So, after striking the surface the ray gets refracted and reaches a rarer medium. Here, the angle of the refracted ray is represented by r1. Further, we can see, that ray 2, incidents the surface with some greater angle than the previous. Consider it to be i2. So, after striking the surface, ray 2 gets refracted by making an angle r2 in the rarer medium.

Consider another case when the angle of incidence is increased further, this is represented by ray 3. So, in this case, the refracted ray moves along the surface. Thus, this case shows the refraction angle is 90°.

The angle of incidence for which the refracted ray makes an angle of 90° and starts moving along the surface. Then that specific angle of incidence is known as the critical angle. So, refraction is nothing but the bending of light rays while moving from a medium to another.

Now, let us have a look at the advancement of the figure that is shown above: 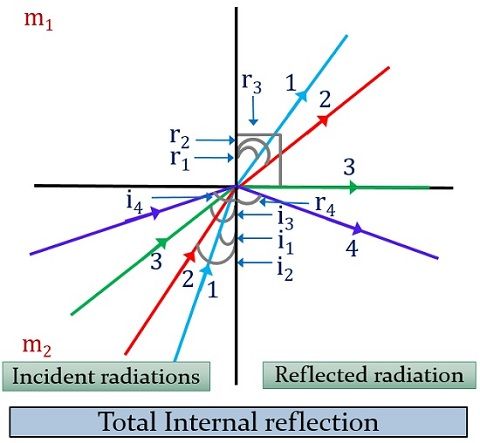 The advancement is nothing but it is simply that now the ray strikes the surface with an angle more than the critical angle. This is represented by ray 4 in the above figure. So, we can see, that ray 4 on striking the medium that is making an angle i4, now gets reflected towards the same medium through which it was incident. Thus, this shows that when the value of incidence angle is raised above the critical value then the ray that was refracting earlier to a different medium will now get reflected and come back to the same medium.

As we have already discussed that the angle of refraction is always greater than the incident angle. So, it is noteworthy that the value of the critical angle can never be 90°.

Basically, there are two conditions that must be necessarily fulfilled in order to achieve total internal reflection, which is as follows:

As when a light ray propagates through an optical fiber, then the small diameter of the core permits only a small reflection of light. So, in this case, the incident angle will definitely be larger as compared with the critical angle. And the refractive index of the core is more as compared to the cladding.

Thus, light can propagate through TIR inside an optical fiber.

This phenomenon is majorly experienced on sunny days. From several meters of distance (around 100 m), one can imagine a puddle (a sort of water pond) but on reaching that particular place no such puddle exists and it simply proves as an illusion.

Critical angle plays a crucial role in TIR. Now, the question arises why it was named so?