Reflection and Refraction are the two major phenomena related to the propagation of beam of light. The crucial difference between reflection and refraction is that reflection is the act of the rebounding of the light wave in the same medium after striking the boundary of a different medium. As against refraction is the phenomenon of bending of light rays towards a different medium after interacting with the boundary of that medium.

Reflection and refraction are the two most basic characteristics of a light wave.

We know that electromagnetic radiation ranging from 400 to 750 nm is called light. As the human eye is sensitive to this specific range of wavelength and thus is able to detect it. Light and our sense of vision are the two main factors that allow the interpretation of objects around us. As light permits us to see the object around us because in darkness nothing is visible at all.

We know that light travels with great speed and that too in a straight line. This straight path followed by light is termed as a ray of light and multiple rays forming bundle is known as a beam of light. Thus reflection and refraction are the two major concepts that must be considered while dealing with light and in this article, we will discuss the difference between these two concepts in detail.

Reflection is defined as the change in direction of light rays due to bouncing back towards the same medium after striking the boundary of a different medium. The figure below shows the reflection of a light ray: 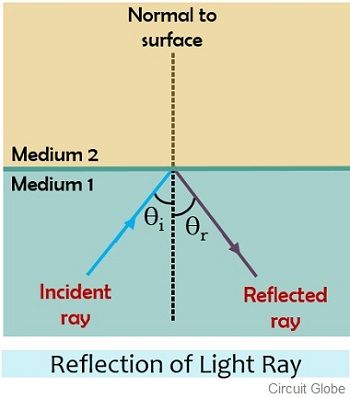 Majorly there are 3 different conditions due to which light ray alters its direction:

There are two basic laws of reflection that states:

Reflection of light is generally classified in two ways on the basis of the surface from which it gets reflected.

Basically when the medium of propagation is changed, then the ray propagates with a different speed from the earlier one. This change in the speed leads to cause variation in the direction of propagation. The figure below represents the refraction of light ray: 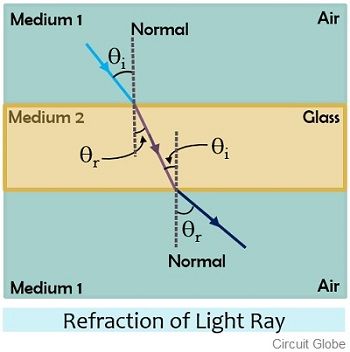 As we can see in the above figure that initially the light ray is propagating from air to glass (i.e., from rarer medium to denser medium). In such a case, the light ray shows bending towards the normal. While when the ray is propagating from denser medium to rarer medium (i.e., from glass to air), then the ray bends away from the normal.

In an optically rarer medium, the speed of light increases, therefore due to an increase in speed, the ray gets bent in a direction away from the normal. While in an optically denser medium, the speed of ray decreases, thus due to a decrease in speed, the light ray gets bents towards the normal. Thus we can say refraction depends on a material medium where light is incidenting.

Key Differences Between Reflection and Refraction

The phenomenon of reflection and refraction from the above discussion can be inferred in a way that reflection permits the ray to propagate in the same medium even after striking the surface. While refraction contradicts this behavior of light and the ray propagates in a different medium.