Definition: The Synchro is a type of transducer which transforms the angular position of the shaft into an electric signal. It is used as an error detector and as a rotary position sensor. The error occurs in the system because of the misalignment of the shaft. The transmitter and the control transformer are the two main parts of the synchro.

The synchro system is of two types. They are

This type of synchros has small output torque, and hence they are used for running the very light load like a pointer. The control type Synchro is used for driving the large loads.

The controls synchros is used for error detection in positional control systems. Their systems consist two units. They are

The synchro always works with these two parts. The detail explanation of synchros transmitter and receiver is given below.

Synchros Transmitter – Their construction is similar to the three phase alternator. The stator of the synchros is made of steel for reducing the iron losses. The stator is slotted for housing the three phase windings. The axis of the stator winding is kept 120º apart from each other. 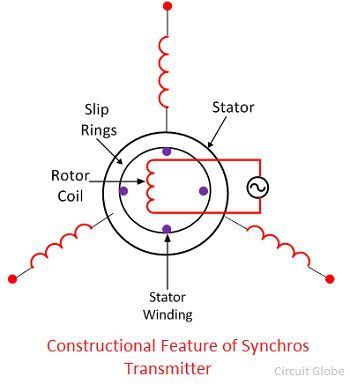 The coils of the stator windings are connected in star. The rotor of the synchros is a dumbbell in shape, and a concentric coil is wound on it. The AC voltage is applied to the rotor with the help of slip rings. The constructional feature of the synchros is shown in the figure below. 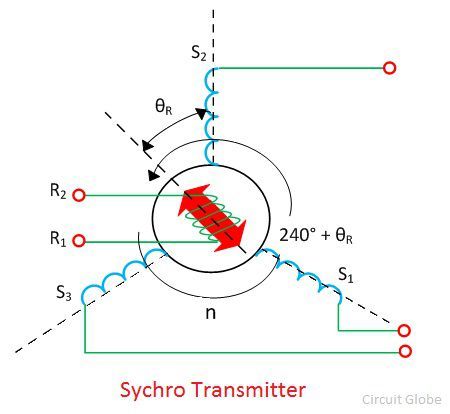 Consider the voltage is applied to the rotor of the transmitter as shown in the figure above. 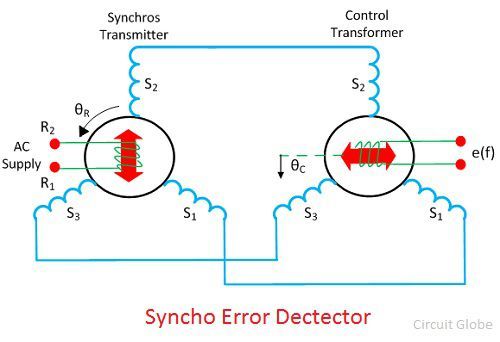 The three terminals of the stator windings are 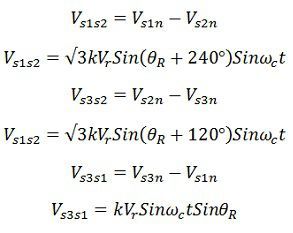 The variation in the stator terminal axis concerning the rotor is shown in the figure below.

When the rotor angle becomes zero, the maximum current is produced in the stator windings S2. The zero position of the rotor is used as a reference for determining the rotor angular position.

The output of the transmitter is given to stator winding of the control transformer which is shown in the above figure.

Consider the position of the rotor and the transmitter is changing in the same direction. An angle θR deflects the rotor of the transmitter and that of the control transformer is kept θC. The total angular separation between the rotors is Φ = (90º – θR + θC)

The rotor terminal voltage of the Synchro transformer is given as

The small angular displacement between their rotor position is given as 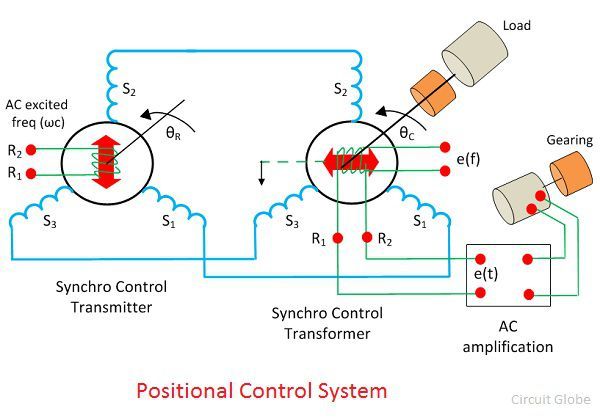 The error signal is applied to the differential amplifier which gives input to the servo motor. The gear of the servo motor rotates the rotor of the control transformer 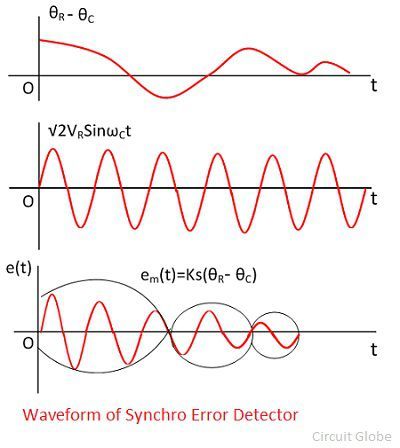 The figure above shows the output of the synchro error detector which is a modulated signal. The modulating wave above shown the misalignment between the rotor position and the carrier wave.

Where Ks is the error detector.