It is not necessary to show all the components of the system on a single line diagram, e.g., circuit breaker need not be shown in the load flow study but are the must for a protection study. In the single line diagram, the system component is usually drawn in the form of their symbols. Generator and transformer connections, star, delta and neutral earthing are indicated by symbols drawn by the side of the representation of these elements.

Circuit breakers are represented by rectangular blocks. The figure shown below represents the single line diagram of a typical block system. It is difficult to draw the line diagram of the few components. So for simplification, the impedance diagram is used for representing the power system components.

Impedance Diagram for the Power System

In impedance diagram, each component is represented by its equivalent circuit, e.g., the synchronous generator at the generating station by a voltage source in series with the resistance and reactance, the transformer by a nominal ∏-equivalent circuit. The load is assumed to be passive and are represented by a resistive and inductive reactance in the series. Neutral earthing impedance does not appear in the diagram as the balanced condition is assumed.

Reactance Diagram for the Power System

The reactance diagram gives an accurate result for many power system studies, such as short-circuit  studies, etc. The winding resistance, including the line resistance, are quite small in comparison with leakage reactance and shunt path which includes line charging and transformer magnetising circuit provide a very high parallel impedance with fault. 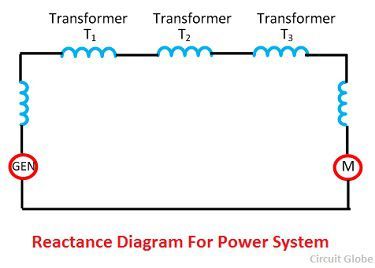