The systematic diagram of the seismic transducer is shown in the figure below. The mass is connected by the help of the damper and spring to the housing. The housing frame is connected to the source whose vibrations need to be measured. 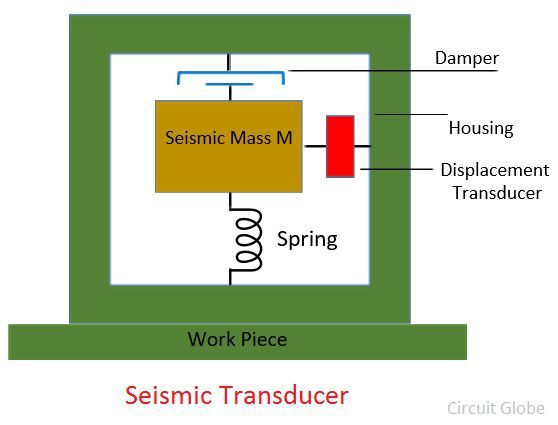 The arrangement is kept in such a way so that the position of the mass remains same in the space. Such type of arrangement is kept for causing the relative motion between the housing frame and the mass. The term relative motion means one of the objects remains stationary, and the other is in motion concerning the first one. The displacement that occurs between the two is sensed and represented by the transducer.

Vibrometer and the accelerometer are the two type of the seismic transducer.

1. Vibrometer – The vibrometer or low-frequency meter is used for measuring the displacement of the body. It also measures the high frequency of the vibrating body. Their frequency range depends on the natural frequency and the damping system.