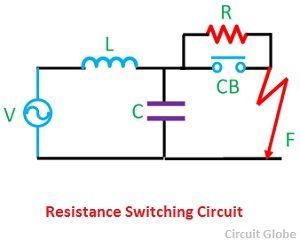 Thus, the arc resistance is increased, leading to the further increase in current through the shunt resistance R. This builds up process continue until the current becomes so small that it fails to maintain the arc shown in the figure below. Now the arc is extinguished, and the circuit breaker gets interrupted. 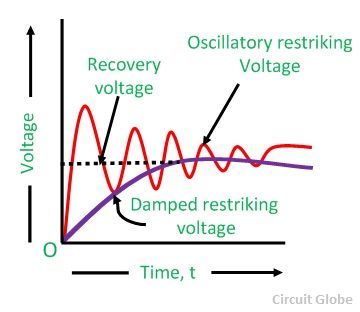 Alternatively, the resistance may be automatically switched in by transference of the arc from the main contacts to the probe contact as in the case of an axial blast circuit breaker,  the time required for this action is very small. Having the arc path substituted by a metallic path, the current flowing through the resistance is limited and then easily broken.

The shunt resistor also helps in limiting the oscillatory growth of restriking voltage transients. It can be proved mathematically that the natural frequency (fn) of oscillations of the circuit shown is given as

To sum up, resistor across the circuit breaker contacts may be used to perform any one or more of the following functions.

The resistance switching is not required in the plan circuit breaker because their contact space is low.