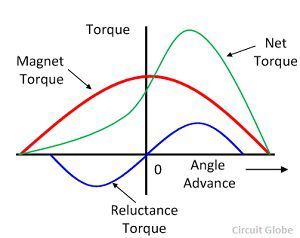 The torque is generated between the two fields twisting the object around the line with the magnetic field. Thus, torque is exerted on the object so that it tries to position itself to give minimum reluctance for the magnetic flux. It is also known as Saliency torque because it causes due to the saliency of the machine. Reluctance Motor depends on the reluctance torque for its operation. it is calculated by the formula

Reluctance torque is mainly developed in the reluctance motor. It is produced in the motor due to the varying reluctance. Their stability limit can occur between +δ/4 to -δ/4. The stator of the reluctance motor is similar to single phase induction motor and their rotor is generally a squirrel cage.