Definition: When the beam of the light enlightens the surface of the metals like sodium, potassium, caesium and rubidium then their electrons start emitting. The phenomenon of emission of electrons is known as the photoelectric emission.

Consider the figure below shows the phenomenon of photoelectric emission. The emitter and the anode are enclosed in the evacuated glass tube G. The anode is made of thin metal and is kept at the positive potential concerning the emitter. When the light incident on the surface of metal then the electrons start ejected from the emitter surface. The electrons moved towards the positive anode and established the current in the external circuit. The flow of electrons is maintained till the illumination is continue. 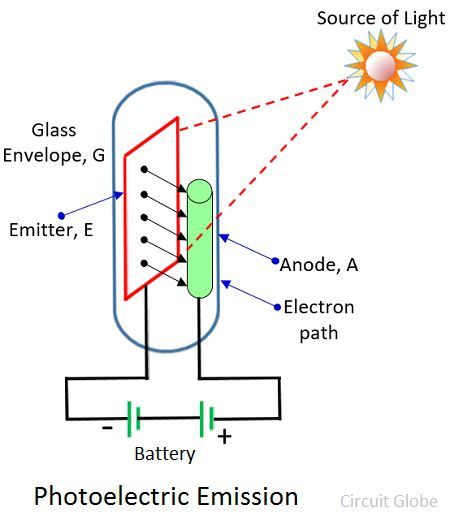 The energy of photons incident on the surface depends on the frequency of the light and is expressed as,

where ‘h’ is the plank’s constant and their value is equal to the 6.626Χ10-34 joule-second, f shows the frequency of light in the hertz.

The energy requires for emission of electrons = eΦ

Where e – electrons charge and φ – work function of electrons in volts.

Hence the photons which cause emission is given by the expression

The minimum amount of energy which causes the photoelectric emission is known as the threshold frequency. And it is expressed as,

The equations give the wavelength of the threshold frequency, 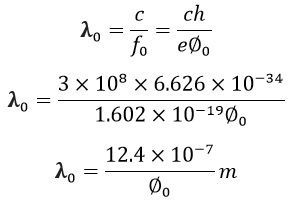 Consider, the voltage V reduces the velocity of emitted electrons and in that case,

The photoelectric emission phenomenon use in the phototubes and that tube is used in the TV and Films sounds.

Note: If the electrons emitted from the surface of metal because of heating then the process is known as the thermionic emission.