Further, the voltage commutation consists of another two methods which are used to produce the injected voltage, named as commutating poles or interpoles and Brush Shift. 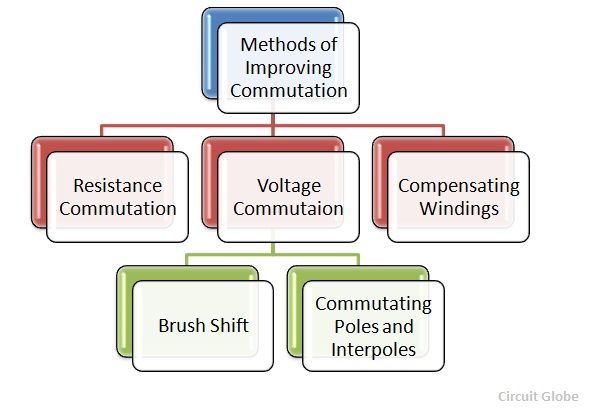 The following methods of Improving Commutation are explained below in detail.

The two methods used to produce the injected voltage in opposition to the reactance voltage are as follows.

The armature and the interpoles mmfs are affected simultaneously by the same armature current. Consequently, the armature flux in the commutating zone, which tends to shift the magnetic neutral axis, is neutralized by an appropriate component of interpole flux.

The interpoles must induce a voltage in the conductors undergoing commutation that is opposite to the voltage caused by the neutral plane shift and reactance voltage.

In case of a generator:

In case of a motor:

The polarity of interpoles is shown in the figure below: 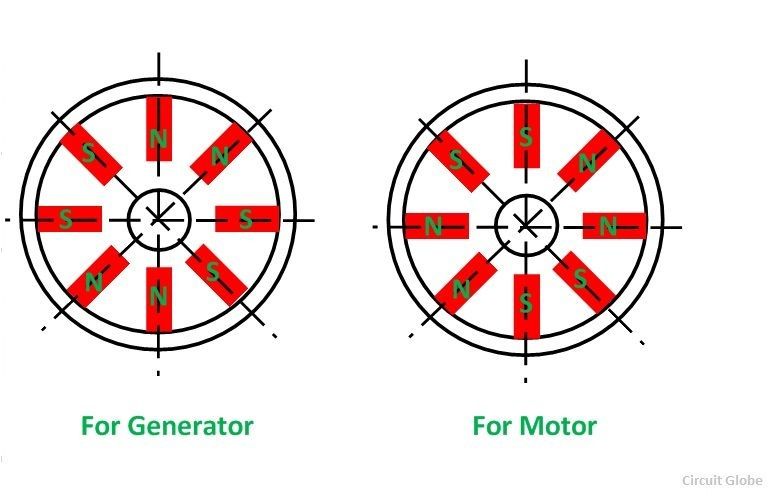 The Interpoles serve only to provide sufficient flux to assure good commutation. They do not overcome the distortion of the flux resulting from cross-magnetizing mmf of the armature.

During severe overloads or rapidly changing loads, the voltage between adjacent commutator segments may become very high. This ionizes the air around the commutator to the extent that it becomes sufficiently conductive. An arc is established from brush to brush. This phenomenon is known as Flashover.

This arc is sufficiently hot to melt the commutator segments. It should be extinguished quickly. To prevent flashover, compensating windings are used.

The most efficient method of eliminating the problem of armature reaction and flashover by balancing the armature mmf is the compensating windings. The windings are placed in the slots provided in pole faces parallel to the rotor conductors. These windings are connected in series with the armature windings.

This is all about Methods of Improving Commutation.