The decimal number system is represented by the digit 0, 1, 2, 3, 4, 5, 6, 7, 8, 9. It consists ten digits and hence the base of the system is 10. Their base is increased by the factor of 10. On the other hand, the binary number system consists only two digits 1 and 0.The base of the binary number system is 2, and it is increased by the factor of two. The first digit has 20 weights, the second has 21 weights, the weight of the third digit is 22 and so on. Consider a decimal number 3285 it can be written as 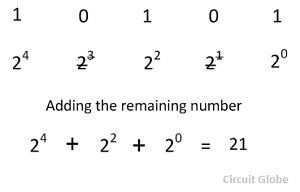 On disregarding the weight 23 and 21 and summing up the remaining weights, we get the equivalent decimal number 21.

For a fractional number, the weights of the digit position to the right of binary point are given by 2-1, 2-2, 2-3, 2-4… etc. Consider the conversion of a fractional binary number.0101 into its equivalent decimal numbers. 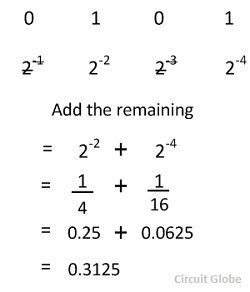 The number with an integer and fractional part are called mixed number.The weight for a mixed number can be written as

Consider the conversion of a binary number 1101.101 into its equivalents decimal number 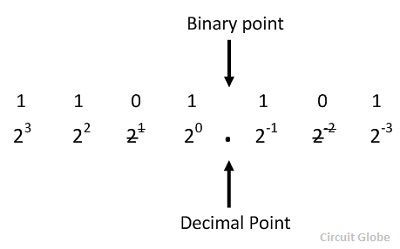 After disregarding the weight 21 and 2-1 and on summing up the remaining weights the required decimal number is 13.625.