For understanding, the binary addition first considers the addition of two decimal numbers as shown below.

The solution of the above sum is explained below.

The binary number system uses only two digits 0 and 1 due to which their addition is simple. There are four basic operations for binary addition, as mentioned above.

The above first three equations are very identical to the binary digit number. The column by column addition of binary is applied below in details. Let us consider the addition of 11101 and 11011.

The above sum is carried out by following step

The above first three operations are easy to understand as they are identical to decimal subtraction. The fourth operation can be understood with the logic two minus one is one.

For a binary number with two or more digits, the subtraction is carried out column by column as in decimal subtraction. Also, sometimes one has to borrow from the next higher column. Consider the following example. 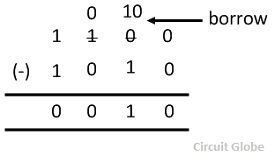 The above subtraction is carried out through the following steps.

26 thoughts on “Binary Addition and Subtraction”