The induction Generator is also known as Asynchronous Generator. An Induction Machine sometimes is used as a generator. Initially, an induction generator or machine is started as a motor. At the starting, the machine draws the lagging reactive volt-amperes from the supply mains. The speed of the machine is increased above the synchronous speed by an external prime mover. The speed is increased in the same direction as that of the rotating field produced by the stator windings.

The torque-speed characteristics of a 3 phase induction machine for all ranges of speed is shown below: 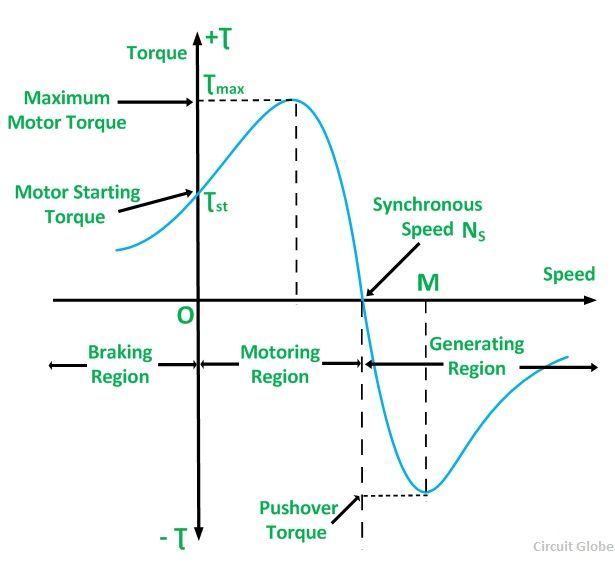 In an equivalent circuit of an induction motor, the mechanical shaft load has been replaced by a resistor of the value given below:

In an induction generator, the slip (s) is negative, and therefore, the load resistance Rmech is also negative. This shows that the load resistance does not absorb the power, but starts acting as a source of power. It starts supplying the electrical energy to the supply mains to which it is connected.

The output of the induction generator depends upon the following factors given below:

It is clear from the torque-speed characteristic of the induction motor that the maximum possible induced torque occurs in the generating mode. This torque is known as Pushover Torque. If the torque becomes greater than the pushover torque, the generator will over speed.