Definition: The relay whose working depends on the distance between the impedance of the faulty section and the position on which relay installed is known as the impedance relay or distance relay. It is a voltage controlled equipment.

Principle of Operation of Impedance Relay

In the normal operating condition, the value of the line voltage is more than the current. But when the fault occurs on the line the magnitude of the current rises and the voltage becomes less. The line current is inversely proportional to the impedance of the transmission line. Thus, the impedance decreases because of which the impedance relay starts operating.

Let, the fault F1 occur in the line AB. This fault decreases the impedance of the line below the relay setting impedance. The relay starts operating, and its send the tripping command to the circuit breaker. If the fault reached beyond the protective zone, the contacts of the relay remain unclosed.

Operating Characteristic of an Impedance Relay

The -K3 is the spring effect of the relay. The V and I are the value of the voltage and current. When the relay is in normal operating condition, then the net torque of the relay becomes zero.

If the spring control effect becomes neglected, the equation becomes

The operating characteristic concerning the voltage and current is shown in the figure below. The dashed line in the image represents the operating condition at the constant line impedance. 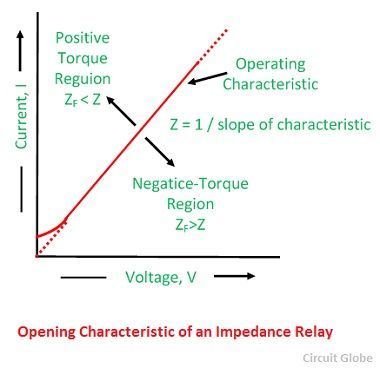 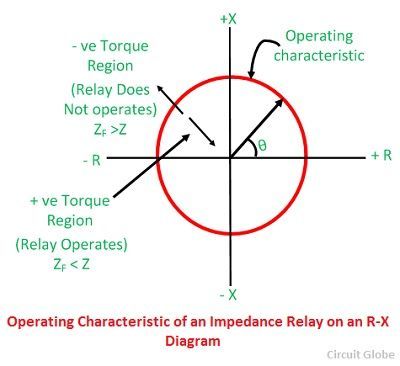 This type of relay is called the high-speed relay.

In such type of relay, the torque is induced by the electromagnetic action on the voltage and current. These torques are compared. Consider the circuit of the electromagnetic type induction relay. The solenoid B is excited by the voltage supplied of the PT. This voltage develops the torque in the clockwise direction, and it pulls the plunger P2 in the downward direction. The spring connects to the plunger P2 apply the restraining force on it. This spring generates the mechanical torque in the clockwise direction.

The solenoid A generates the other torque in the clockwise direction and thus moves the plunger P1 downwards. The solenoid one is excited by the CT of the lines. This torque is called the deflecting or pick up torque.

When the system is free from fault, the contacts of the relay become open. When the fault occurs in the protective zone, the current of the system rises because of which the current across the relay also increases. The more torque developed on the solenoid A. The restoring torque because of the voltage decreases. The balance arms of the relay start rotating in the opposite direction, thus closed their contacts. 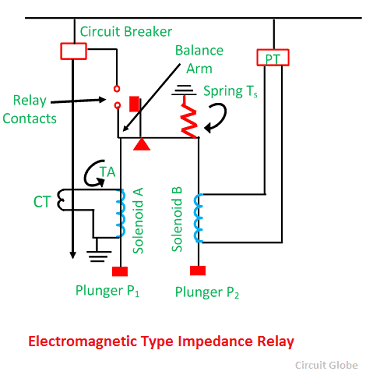 The pull of the solenoid A, i.e., (current element) is proportional to I2 and that due to solenoid B (voltage element) to V2. Consequently, the relay will operate when

The value of the constants k1 and k2 depend on the ampere-turns of the two solenoids, and the ratios of the instrument transformers. By providing tappings on the coil, the setting of the relay can be changed. 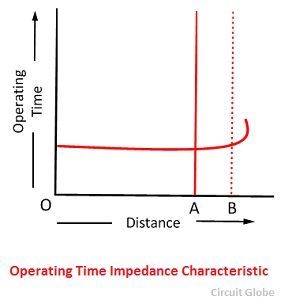 The circuit diagram of the induction type impedance relay is shown in the figure below. This relay consists current and voltage element. The relay has an aluminium disc, which is rotating between the electromagnets.

The upper electromagnet has two separate windings. The primary winding is connected to the secondary coil of the current transformer. The current setting of the winding is varied by the help of the plug bridge placed below the relay. 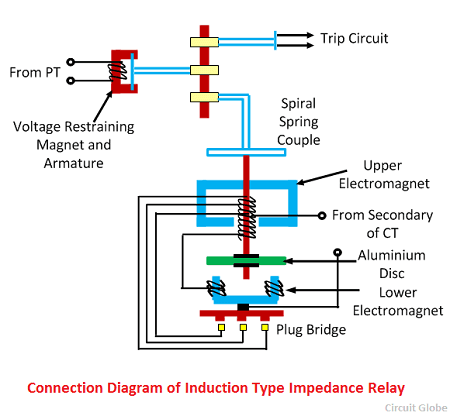 The electromagnetics of the relay connects in series with each other. The flux induce between the electromagnets produces the rotational torque, which rotates the aluminium disc of the relay. The permanent magnet provides the controlling and braking torque.

In normal operating conditions the force exerted on the armature is more than the induction element which keeps the trip contacts open. When the fault occurs in the system, then the aluminium disc starts rotating, and their rotation is directly proportional to the current of the electromagnet. The rotation of the disc-wound the spring. 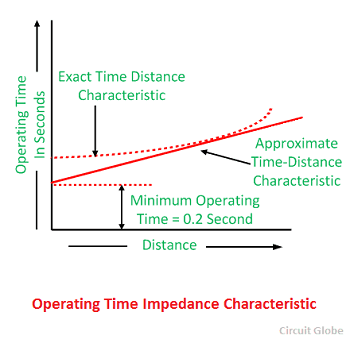 The figure below shows that the relay does not operate for the value more than the 100 percent pickup value. The curves 1 is the actual characteristic, and the curve 2 is the simplified characteristic of the curve 1. 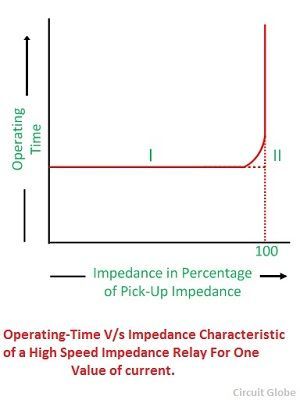 The following are the disadvantages of the impedance relay.

The relay always operates when the impedance of the line is less than the relay settings.