The HRC fuse element carries the short circuit or faults current for the specific interval of time. And if the fault removes in that specific period then the fuse element remains safe and it does not melt or breaks. The fuses element is kept inside the airtight container.

When the fault current passes through the fuse, the fuse element melt and break. The enclosure in which the fuse element is placed is filled with the chemical powder. The vapour of fuse element and the powder together form the high resistive substance which extinguishes the arc.

The liquid type HV HRC fuse is mostly used in the high voltage circuit. It is used for the transformer protection or for the circuit having a rating higher than 400A. 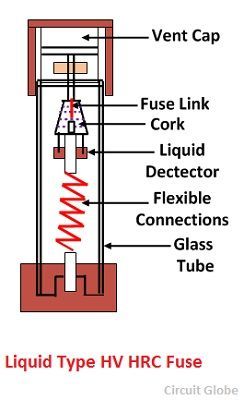 When the fault occurs, the shortcircuit current passes through the fuse element. The fuse element becomes melts and breaks. The small quantity of gas generated at the time of fusion. The liquid uses in the fuse extinguish the arc.