It is used for overload or short circuit protection in high voltage up to 66 KV and low voltage up to 400 kV. In some places, their use is restricted to those applications where their performance characteristics are especially suitable for the current interruption. 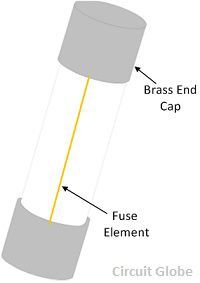 The working of the fuse depends on the heating effect of the current. In normal operating condition, the normal current passes through the fuse. The heat develops in the fuse element because of the normal current and this heat is dissipated by the help of the surrounding air. Thus, the temperature of the fuse is kept below the melting point.

The fuse element is made of the highly selected metal conductor. The cartridge holds the fuse element. The main function of the fuse of the element is to allow the normal current to flows through the fuse and break the circuit when the high magnitude current passes through it.

Advantages of an Electrical Fuse

Disadvantages of an Electrical Fuse

Fuses are used for the protection of the cables in low voltages light, and power circuits and for transformers of rating not exceeding 200 KVA, in the primary distribution system. Fuses are used in low and moderate voltage applications where the frequent operation is not expected or where the use of a circuit breaker is uneconomical.